Retail package is as basic as it gets

The HTC DROID Incredible 4G LTE comes in a tiny box, whose look alone is enough to suggest that you will not find much inside. There's a charger, a microUSB cable, as well as a set of booklets and that's that.

The retail package and its contents

Once again, we open a US retail package hoping to see a pair of headphones inside, but end up disappointed. Unfortunately, you will have to get those on your own dime.

There's nothing revolutionary in the way the HTC DROID Incredible 4G LTE looks. In case you were wondering what Verizon's own HTC Rezound would look like if it shrunk, there's hardly a better answer than the subject of this review. That said, the latest DROID Incredible is a decent looking device, albeit lacking the style, which the HTC One Series members offer in spades.

The smartphone is available only in red/black color scheme, which is in line with the previous DROID Incredible offerings. It is also coherent with the Beats Audio branding.

Build quality is typical for a product made by HTC. The DROID Incredible looks and feels superbly put together, though plastic is the predominant material of choice.

Physical measures are among the DROID's advantages. At 121.9 x 61 x 11.7 mm this is one of the most compact smartphones out there, while the handset's weight of 132 grams is pretty easy to swallow too. Thick it might be, but the DROID Incredible is the only top-drawer smartphone, which allows to be handled easily with one hand.

HTC's offering sized up against the Sony Xperia ion

Sadly that comes at the price of a smaller, 4" S-LCD, which doesn't sound like much by today's standards. Nor will its qHD resolution impress anyone given that the HD displays are now considered a standard in this price category. However, thanks to its non-PenTile nature and pixel density of 275ppi, the DROID's screen is quite pleasant to look at. Viewing angles and sunlight legibility are also acceptable, though not the best we've encountered.

The screen does an adequate job

Above the screen, we have the proximity and ambient light sensors, the earpiece, and the 720p video call camera, to go with the ubiquitous Verizon logo. There's also a tiny status LED under the earpiece grille.

Underneath the screen, we find the three controls typical of Android 4.0 ICS which, in the HTC tradition, come in capacitive flavor. The haptic enabled Back, Home and Task switcher keys are well spaced and responsive.

The microUSB port sits lonely on the left side of the DROID Incredible. On the right, you have the volume rocker at your service. A camera button would have looked great there too.

The power/lock key and 3.5mm audio jack can be found on top, along with a secondary microphone for active noise cancellation. The mouthpiece is the only thing on the bottom of the handset.

The view on the top and bottom of the DROID Incredible

The 8MP main snapper is on the back of the device with the single LED flash and loudspeaker grille by its sides. HTC, Beats Audio and Verizon 4G LTE logos are all located on the back as well and, coupled with the hump on the cover, make the whole area look quite busy.

The back of the phone is busy

The 1700mAh removable battery, microSD, and microSIM card slots are located under the battery cover. Given the lack of expandable memory in the HTC One X and One S, we suspect that the DROID Incredible 4G LTE will make some users of the aforementioned two smartphones jealous.

Despite its relatively small battery unit, the DROID achieved the impressive endurance rating of 42 hours in our battery test. This means that the handset can go on for almost two full days if you use it for an hour each of telephony, web browsing, and video playback every day. 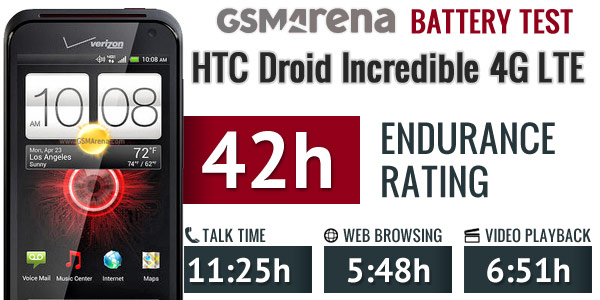 Handling the HTC DROID Incredible 4G LTE is a pleasure. The combination of the relatively thick for today's standards body and the grippy plastic on the back cover allows for a hassle-free one hand operation. It was great to remember that there are high-end Android smartphones out there, which are still up to such an exercise.

Overall, we found nothing to complain about the build quality of the HTC DROID Incredible 4G LTE. Design is a mixed bag - at the end of the day, it will be up to the user to determine whether the DROID's looks are classic or ageing.

Following next is a look at Verizon's take on Android 4.0 Ice Cream Sandwich and HTC Sense 4.0.