Yet another case of a basic US retail package

The HTC Evo 4G LTE comes in a cool looking, eco-friendly retail box. Inside it, you will find a charger and a microUSB cable, to go with a couple of booklets.

It is needless to say by now, that a pair of headphones would have been much appreciated in the box, especially given the solid audio credentials and flagship status of the device.

The HTC Evo 4G LTE might not be too different from the HTC One X on the inside, but its design has been significantly altered. The polycarbonate unibody has made way for a metal chassis, which is quite similar to the one found in the HTC One S. Most of the Evo's body is made from a single piece of metal, featuring a couple of different finishes - matte at the front and back of the device, and brushed aluminum around its edges.

The small plastic cover on the back has a glossy black finish and gets smudged easily. While we understand that the presence of a plastic lid is a necessary evil here, we reckon that soft-touch plastic could have been a better solution.

The HTC Evo 4G LTE will only be available in a black color scheme for now. The bright red built-in kickstand on the phone's back however, along with the red ring around the camera, combine to add a touch of coolness to the design. They also show the newcomer's relation to the original HTC Evo 4G from 2010.

The HTC Evo 4G LTE's measures are almost identical to the HTC One X's. At 134.8 x 68.9 x 8.9 mm the Sprint offering is just 1mm narrower than its polycarbonate relative. The handset's weight is 134 grams - slightly more than the One X's, but still quite acceptable for a metal smartphone with such a large screen.

The 4.7" display of the HTC Evo 4G LTE is the same as the unit found in the HTC One X. It offers arguably the best image quality of any LCD on the market. Not only is it remarkably sharp (at about 312 ppi, it's virtually impossible to distinguish individual pixels), but also has great contrast and nicely saturated colors.

The display is great

You can find out all about the display of the HTC Evo 4G LTE, and its performance over here.

Underneath the screen, we find the three controls typical of Android 4.0 ICS which, in the HTC tradition, come in capacitive flavor. The haptic enabled Back, Home and Task switcher keys are well spaced and very responsive. We've been over this already - while ICS dictates on-screen controls, the latest Sense UI requires actual Back and Home buttons.

The left side of the Evo features the microUSB port, which is used for data transfers, charging and, thanks to its MHL support, TV-out. With an MHL adapter you'll be able to output 1080p content to your HDTV directly from your phone, so purchasing one is probably worth it.

The microUSB port on the left

On the right side we find the super slim volume rocker and a dedicated camera button. The latter should make quite a few One users jealous, as it is not present in neither the HTC One X nor One S.

At the top we find the 3.5mm audio jack, a microphone pinhole (probably used for ambient noise cancellation in calls) and the Power/Lock key, which is easy enough to hit when needed but still reasonably secure against accidental presses. A tiny latch for removing the plastic cover is also located beneath the power/lock key.

The view on top • the mouthpiece at the bottom

On the back of the phone is where the 8MP camera and its LED flash are located. The loudspeaker grille and the built-in kickstand are there as well.

The back of the HTC Evo 4G LTE

The kickstand itself is a great addition to the device - it can be really helpful when viewing multimedia or making video calls. It is made of metal and its folding mechanism feels very sturdy. It can also be used in both directions.

The kickstand is seriously cool

Removing the plastic cover on the back reveals the much coveted microSD card slot. The device's antennas are also located there in order to avoid any death grip issues.

The HTC Evo 4G LTE features a non-removable, 2000 mAh Li-Ion battery, which helped the smartphone achieve the rather impressive endurance rating of 45 in our test. This means that you will need to recharge your Evo every 45 hours if you use it for an hour each of telephony, web browsing, and video playback every day. 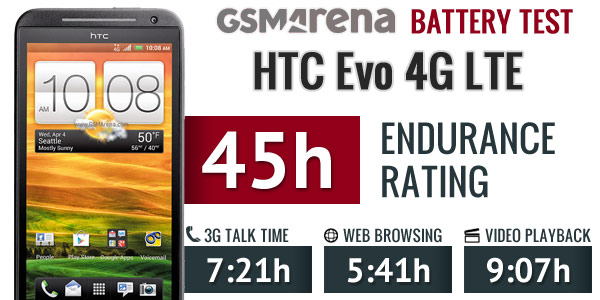 Handling the Evo is a pleasure. The matte finish metal is grippy, so accidental drops are unlikely. The phone is fairly narrow, so even one handed operation is possible on some occasions.

The HTC Evo 4G LTE unsurprisingly impressed with its design and build quality. Battery life is great too. Our only grievance is with the plastic cover on the back, which is a serious fingerprint magnet. Like we already mentioned however, it is a small price to pay for having a microSD card slot on board.

Hit the next page for a closer look at the software talents of the HTC Evo 4G LTE. Don't be surprised if things look a tad familiar. After all, the smartphone is rather closely related to the HTC One X.