The start of a journey

HTC Explorer review: The start of a journey

The HTC Gallery in the HTC Explorer displays a list of thumbnails. The Albums app automatically locates images and videos, no matter where they are stored. You can hide certain folders if you like.

Ones you pick one of the folders, you're presented with a grid of the photos inside. There is also a camera shortcut, but it’s only available once you start browsing any of the sub-folders.

Sharing a photo on the HTC Explorer is very straightforward – tap the share button, pick your preferred sharing method and select one or multiple photos/videos to share. There’s everything from sharing via Bluetooth or email, to posting on Facebook or Picasa. You can also upload videos straight to YouTube.

There's no sharing on Twitter by default and there's no DLNA connectivity either (things we're used to from other HTCs).

You can also mass delete images, but still no mass copy-and-paste options – you’d need a proper file manager for that. There are also some basic editing tools too, like cropping, rotating and applying effects.

HTC Explorer supports multi-touch and you can take full advantage of it while browsing your images. You can zoom to 50% with a simple double tap on the screen or continue to pinch zoom until you reach 100%. The implementation here is extra smooth too. And if you pan past the edge of an image, you'll scroll into the next image, which is a handy way to browse multiple photos.

Video files can be accessed in the All videos subfolder in the Gallery or through the Videos shortcut. They both bring you to the same place though.

The video files are displayed as a grid and can be shared over Bluetooth, MMS, email, YouTube or Facebook..

The Videos app is part of the Gallery • Landscape mode

The video playing interface on the HTC Explorer offers a full screen toggle (stretches the video to the screen's aspect) and you can scrub through videos. There are also sound enhancement options - SRS and 5.1 virtualization. Subtitles are not supported though. DLNA is a no-go too with the Explorer.

The video player did well enough for the class - sub-HD videos with DivX or XviD codec were generally not a problem, even entire movies. 720p videos wouldn’t play though, nor would MKV files, but given the screen size and resolution and lack of TV-Out, we hardly think this is a problem.

The music player uses a tabbed interface. The tabs group your music collection in different ways - by artist, album, playlist or just all songs.

The Explorer offers the SRS sound enhancement plus a standard set of equalizer presets when you connect a headset.

FM radio with RDS on board

The HTC Explorer is also equipped with an FM radio, which has a pretty simple interface. It automatically scans the area for the available stations and allows you to mark some of them as favorite. It also supports RDS and allows loudspeaker playback.

Great audio output for the class

Despite its low position in the pecking order, the HTC Explorer did fairly well in our audio quality test.

When connected to an active external amplifier, the Explorer produces nicely clear output with above average loudness. The scores it achieved are good, save for the only average intermodulation distortion. Frequency response is great for the most part, but the extreme bass frequencies are slightly cut off.

It seems that the HTC Explorer was optimized to work with headphones, as its performance in that scenario was pretty decent. Its distortion levels did go up a little and so did stereo crosstalk, but differences really aren't as big as we are used to seeing. In fact we would say the Explorer is among the better performers with headphones we have tested.

Here go the results so you can see how the Explorer did for yourselves. 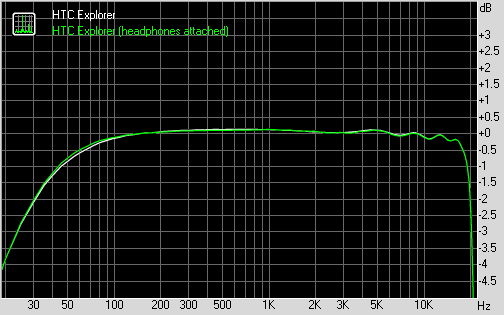