The HTC First comes in a retail box, bearing an AT&T and Facebook logos. Inside it, you will find a charger, a USB cable, a couple of HTC stickers, and the usual set of leaflets.

There are no headphones included in the retail box of the device. You will need to pick up a pair of those on your own dime.

The HTC First sports one of the most understated designs we've encountered in quite some time, albeit with a noticeable resemblance to the first iPhone. No element on the phone's curved body pops out - it is sleek and clutter-free. The subtle branding on the back further enhances the minimalist looks.

There's something iPhone-esque about the HTC First

The handset is available in four color schemes -black, white, light blue, and red. The black colored version we've tested is easily one of the stealthiest phones available at the moment.

Build quality is phenomenal. The HTC First is made from soft-feeling polycarbonate, which feels pleasant, yet extremely sturdy. The display is covered by Corning's Gorilla Glass, so it should also manage the daily wear and tear with ease.

The HTC First size is extremely friendly to both your hand and pocket. The handsets measures 126 x 65 x 8.9 mm and its weight tips the scale at 123.9 grams. In an Android realm, where 5" screens are quickly becoming the norm in the high-end segment, the First feels like a breath of fresh air with its 4.3" unit.

HTC First next to the HTC One

The 4.3" Super LCD display of the HTC First is gorgeous. Its 720p resolution is a long way from the current crop of Android flagships, but, thanks to the phone's modest display size, it still makes for a Retina-beating pixel density of 342ppi.

The display is great

Viewing angles are good, and so is the contrast and sunlight legibility. Overall, the display makes for a great companion for gobbling up multimedia of any kind.

Above the display, you fill find the almost invisible earpiece, accompanied by the front-facing camera, the ambient light and the proximity sensor. Below the display there is a trio of capacitive buttons.

The volume rocker is on the left side. The microSIM slot and the microUSB port are on the right.

A look at the sides of the HTC First

The power/lock key and the 3.5mm audio jack are located on top of the handset. On the bottom you will find a great-looking loudspeaker grille.

On the top left corner of the handset's back reside the 5MP camera and its single LED flash. An AT&T, Facebook, and HTC logos can be seen on the bottom.

A look at the back of the device

The 2000mAh non-removable battery of the HTC First propelled it to the impressive endurance rating of 57. This means that you phone will easily make it through more than two full days if used for an hour each of telephony, web browsing, and video playback daily. Most importantly however, the HTC First should be able to make it through a day of heavy use. 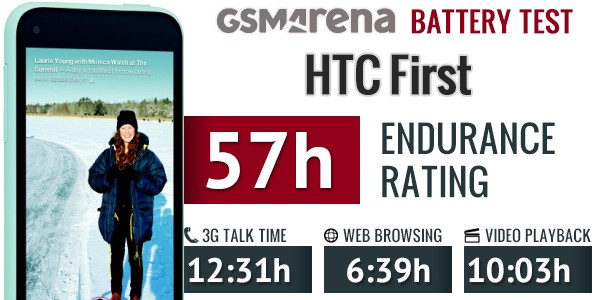 Handling the HTC First feels like a breeze. Thanks to its relatively modest screen size and rounded body, one-handed operation is a joy. The soft-feel polycarbonate feels grippy, so accidental drops are not likely.

Following next is a look at the user interface of the smartphone, headed by Facebook Home.