There is a capable image editor on board. It can be accessed from a small icon from the bottom left hand-side corner, and offers light adjustments (so you can bring out the shadows or the highlights), effects, color styles, red eye correction, straightening a photo, sharpening and face glow (which detects faces automatically). Most of these options have a slider that lets you fine-tune the strength of the effect.

The video player is far from perfect - you get play/pause and a slider to scrub through the video but that's it. There's still no dedicated videos app (you have to go through the Gallery). The player however, includes support for the the DivX and XviD codecs.

The video player could be much better

The HTC First comes with the latest stock Music app. It has the same side-scrollable tabs like much of the other stuff in Jelly Bean and comes with plenty of updates.

While the player is running, the lockscreen features the album art and track info for the current song along with simple playback controls. The notification area also lets you control the playback via an expandable notification.

The music player in the lock screen and the notification area

The HTC First audio output came out pretty impressive as is the case with most recent HTC smartphones. It did great in the active external amplifier part of the test, posting great scores all over the field. In addition it had volume levels higher than the majority of smartphones out there, including the Apple iPhone.

More impressively, the only area of the First performance that degrades is when you plug in a pair of headphones. Volume levels remain at the same high level, too, so the overall performance. 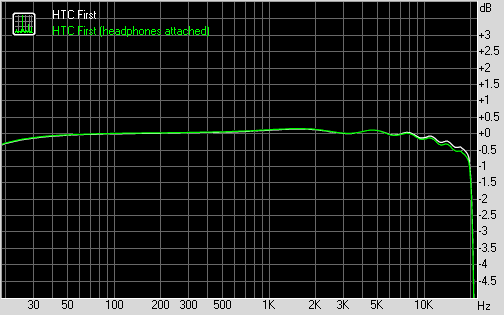