We just went from no photos of the HTC HD7 to several live photos from several different sources. Some specs of the Windows Phone 7 powered behemoth were unofficially confirmed and a price too (again).

Specs and renders of the HTC HD7

The specs of the HTC HD7 include a 4.3" WVGA touchscreen, a 1GHz QSD8250 Snapdragon CPU and a 5MP camera with dual-LED flash and 720p video recording. There's 8GB of built-in storage, though the situation with the microSD card slot is unclear - there are contradicting reports (HTCInside.de says "yay", WMPowerUser says "nay").

Live shots of the HD7 and its UI, tweaked by HTC

Update: The full specs for the HTC HD7 leaked. It's just 11.2mm thick, 576MB RAM and T-Mobile USA 3G bands. There won't be a microSD card slot. Check out the full specs below. 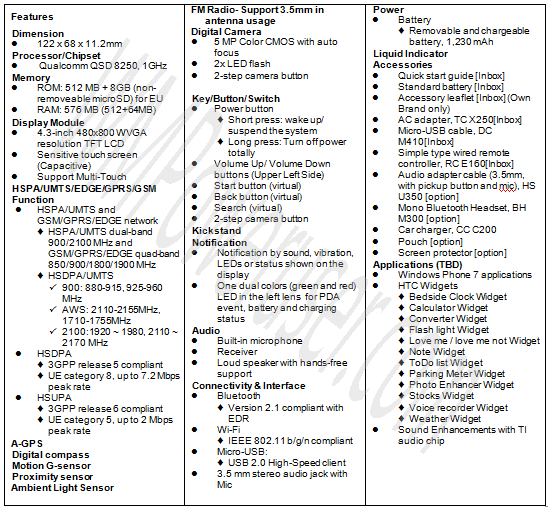 Anyway, the photos of the HTC HD7's back reveal two interesting things - a kickstand and an "HD3" label (we're guessing that was the original name before HTC changed it to emphasize on Windows Phone 7).

The HTC HD7 has a kickstand

A new bit of information suggests that the HTC HD7 will retail on T-Mobile and a 560 euro (750 USD) figure is mentioned as price. That's not too far off from the 599 euro price for O2 Germany from Tuesday. All this info is from rumor-land so take it with a pinch of salt.

I was gonna get HTC HD2 but dont like 6.5 so got a motorola milestone with android 2.1 now i seen the HD7 im gonna get it. Nice phone. Mate of mine got a HD2, nice phone but shit OS