At the rate these HTC M7 leaks and teasers go, we are afraid HTC will have little to announce at its February 19 event. Today we got to learn the pricing and release date of the smartphone (or at least in France), courtesy of a listing from a local retailer.

According to the leak, the HTC M7 will be launched on March 8, and it will be using that exact name. This refutes earlier rumors that M7 was merely a codename, which won't be used any more once the smartphone gets official. 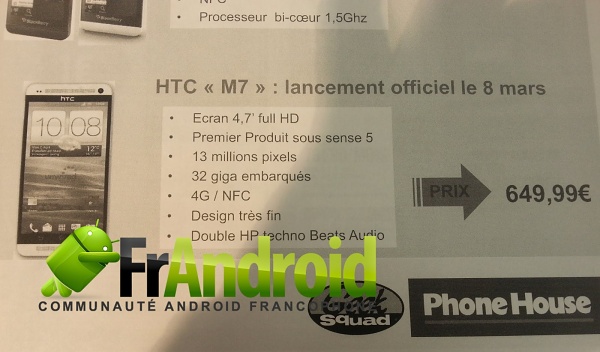 The SIM-free HTC M7 will be priced at a whopping €649.99(about $879) and is expected to be available in different colors.

Furthermore, HTC M7 will be using a 13-megapixel camera with stacked sensor and ultrapixels for the first time and it will be interesting to see how the camera performs. M7 is also confirmed to feature the latest HTC 5.0 sense and Double HP techno Beats Audio.

As we are waiting for this phone in India...

Htc including this feature. .. Than htc no. 1 phone of the word.... I also wating to this phone..

I also have the HTC Jewel (HTC EVO 4G LTE) with an SD card slot supporting 64GB cards AND 16GB internal...the M7 is slightly larger than the Jewel, so why could they not do 32GB and microSD?