After showing us a dual camera setup on its back earlier today, the HTC M8 appeared yet again. This time around, we get to see the alleged front of the yet to be announced smartphone in a couple of leaked photos. 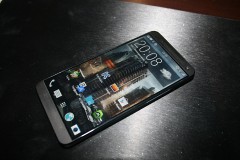 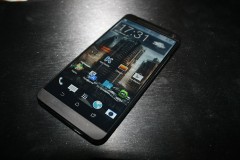 The two images reveal that the upcoming device looks a lot like its predecessor, save for the significantly smaller display bezels and on-screen Android navigation buttons. The latter are said to be removable via a swiping gesture (the photos support this theory, as on one of them, the handset is without on-screen buttons).

We must note that the original source of the photos has already removed them. In our book, this means that we are indeed looking at the real thing.

Alleged specs of the HTC M8 include a Qualcomm Snapdragon 800 SoC, 5” 1080p display, 2GB of RAM, dual 5MP camera setup, and Sense-d Android 4.4.2 KitKat. The device is tipped to go official in March at an event in New York City.