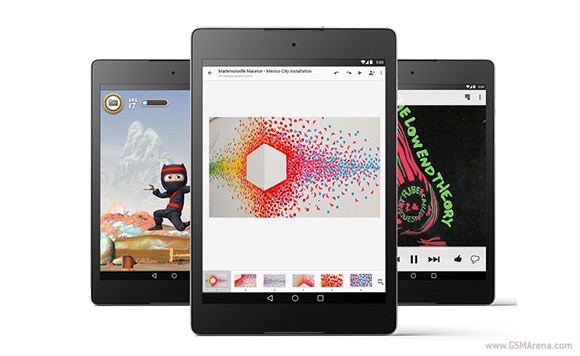 HTC should be pleased with its effort too. Three years after leaving the tablet market, the Taiwanese manufacturer couldn't possibly have returned to it with a bigger bang. The Nexus 9 combines all the strengths that HTC has been known for with Google's newly found upmarket philosophy for the product range.

Hardware-wise, the performance of the Nexus 9 is truly jaw dropping. The 64-bit Tegra K1 chipset is the most powerful piece of silicon we've seen in an Android device. It handily crushed all competitors in our benchmark tests.

The IPS display, in line with HTC's track record in the field, is a quality piece too. It is the perfect platform to showcase that brand new OS Google built.

Speaking of OS, we are pleased to tell you that Android 5.0 Lollipop truly is a game changer. The new ART runtime, coupled with Google's material design bring an altogether new, more fluid experience. Gone are the occasional hiccups of old - the Nexus 9 feels as snappy and responsive as the best Apple has to offer.

Users will enjoy the BoomSound stereo speakers too. They are a perfect complement to the vivid display and the powerful multimedia credentials of the Nexus 9.

Lack of more built-in memory options is our biggest gripe with the HTC Nexus 9. The 16GB version will not be of much use to a large portion of the users, so the 32GB option is a must. We reckon that the latter should have been the entry-level option for a tablet of such stature, with 64GB next in line.

Split-screen multitasking is still a notable omission in stock Android. With the Nexus 9 hardware easily up to the task, we really hope that Google adds the productivity feature in the future. Samsung already showed how big a difference it can make and it's about time Google follows suit.

The price tag of the latest Nexus tablet puts it squarely in the premium segment and rightfully so. Here are some of the alternatives available at the moment for a similar budget.

Apple iPad Air 2 is arguably the closest rival to the HTC Nexus 9. The ultra-slim tablet entices with metal body, the same screen resolution, and a wealth of optimized apps. However, it carries a noticeable price premium ($499 for 16GB Wi-Fi-only; 64GB is $100 more) and lacks the stereo speakers of the Nexus 9.

The Samsung Galaxy Tab S 8.4 and Tab S 10.5 handily beat the Nexus 9 in terms of display quality and resolution. Samsung's TouchWiz UI also adds a lot of functionality to Android that is missing in the stock version, particularly in the productivity department.

However, both tablets are way behind in terms of hardware oomph. You will also have to be patient when it comes to receiving your OS updates.

The Sony Xperia Z2 Tablet and Xperia Z3 Tablet Compact are the Japanese giant's take on the high-end Android tablet theme. The duo features sleek waterproof bodies, and some exclusive apps that Sony delivers. However, neither of the tablets can match the display resolution of the Nexus 9 or its powerful hardware.

The Nvidia Shield is arguably the closest Nexus 9 competitor in the Android realm. It's powered by the 32-bit version of the Tegra K1 SoC and offers slightly lower display resolution for less money.

The Shield Tablet has serious gaming credentials thanks to the optional controller and its ability to stream high-quality video games. Those who like gaming on Android should take a look at it. It doesn't have Lollipop just yet and chances are it won't be getting soon.

The Xiaomi Mi Pad 7.9 is a cheaper alternative to the Nexus 9 with 32-bit Tegra K1 hardware. However, the Chinese entry looks decidedly cheaper than the HTC slate. Its UI might not fit all tastes either.

The HTC Nexus 9 is Google's take on a flagship Android tablet, so it deserves close attention from everyone on the market for a slate. This year, thanks to the brand new, pure Android 5.0 Lollipop and the beastly hardware, even iPad users may apply. The newcomer is a safe bet to impress.