The Nexus 9 by HTC comes in a white box adorned with a large number 9. Inside, you will find the device itself, alongside a dual-voltage USB charger, USB cable, and a bunch of booklets.

The retail package of the Nexus 9

Additional accessories for the tablet include an origami-inspired magnetic cover, as well as a keyboard folio. Both accessories look decidedly premium and pack a great deal of functionality.

Flipping the corner of the origami cover that covers the camera for example automatically activates it. The folio keyboard on the other hand boasts five months worth of battery life.

The design of the HTC Nexus 9 is in line with that of the Nexus 7 it replaces. The device features an all-black front and a back that's dominated by a large Nexus logo.

HTC Nexus 9 in the flesh

The metal frame of the device differentiates it from past models. It gives it a premium aura that is in line with its upmarket aspirations.

There are three available colors for the slate - black, white, and sand. Users have a choice of toting an understated device like the black unit we tested, or something flashier like the remaining two options.

The build quality is impeccable. Gorilla Glass 3 covers the front of the Nexus 9, while its back features the same soft-touch plastic as the one found in the Nexus 7 (2013). Not only does the metal frame look great, but it provides extra rigidity and further assures the user that this is a high-quality product.

We can't say we're surprised by the stellar build. HTC has a long track record of superb finish to its devices and the Nexus 9 is no exception - it is ready to meet the expectations of even the most discerning user.

The Nexus 9 is easy to handle. The matte plastic on the back enhances grip and handles smudges well. The metal frame on the other hand, adds to the pleasure of handling and the solid feel.

HTC Nexus 9 features 8.9" IPS LCD display with 4:3 aspect ratio and QXGA (2048 x 1536 pixels). The aforementioned aspect arrives on a Nexus tablet for the first time - it puts the HTC slate squarely against the iPad family.

With pixel density of 281ppi, the screen of the Nexus 9 is sharper than the 9.7" Retina of the iPad Air 2 (264ppi), which has the same resolution. However, it is nowhere near the eye-popping 359ppi of the Samsung Galaxy Tab S 8.4.

A closer look at the screen of the slate

As expected from a high-end IPS unit, the screen offers pleasingly natural colors, top notch viewing angles, and high brightness for any scenario. Contrast is impressive, though it doesn't match that of today's AMOLED displays. 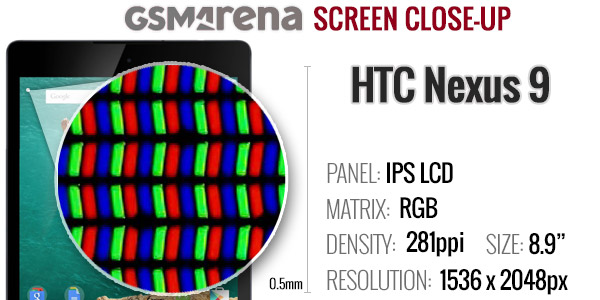 Sunlight legibility is good too. Android Lollipop has an adaptive brightness feature that adjusts the brightness accordingly - we found it to work quite well.

Overall, the 8.9" screen of the Nexus 9 is a real pleasure to look at for extended periods of time.