Interestingly, the HTC One A9 spreads at 145.8 x 70.8 x 7.3 mm, which is about 1mm thicker and wider than the HTC One M9 flagship. The One M9 is also built around a 5" display, but offers stereo speakers at the front, while the A9 replaces them with just a fingerprint scanner. Luckily the more compact AMOLED screen and the smaller battery have allowed for a thinner profile at 7.3mm and a lighter body at 143g of total weight.

HTC One M7 wasn't the first all metal device of the Taiwanese company, but it did popularize the antenna strips over the back. The HTC One M8 had the same strips, the One M9 used them, too. And the One A9 also relies on similar plastic strips to cover the antenna pieces over the back.

Looking at the HTC history, the One A9 is indeed an evolution of the One series - it's basically a thinner and flatter HTC One Mx (you pick a number). But putting the trending 2.5D curved edge front cover glass, made it look more or less like an iPhone 6.

HTC One A9 next to an iPhone 6s

The HTC One A9 looks like an iPhone 6. But it also looks like an HTC One M8. The truth is there is very little space for design innovation today and inevitably the devices are becoming closer and closer together. Right now if you want to make a sleek and thin smartphone, you put a 2.5D glass screen. A rounded edges makes it look even thinner and improve the aesthetics. In the end, the phone may turn up looking like an HTC, or a Sony, or a Samsung. Or an iPhone. True, the HTC have overdone it. They could have made some changes to the design for the sake of it being different. Instead, they chose not to, and we'll be following closely what that would mean for their sales. We have a feeling conservative European users are not looking for an iPhone clone but who knows!

So, the HTC One A9 evolved from its previous One M siblings by flattening the metal unibody and putting a Gorilla Glass 4 protective glass with curved edges. Both of those features ensure modern and sleek design and premium exterior. We do appreciate HTC's desire to keep the iconic metal shells for the One series and we are quite fond of the One A9 handling experience.

The One A9 doesn't impress with the screen bezels, but the black glass helps thinning the overall impact of the top and bottom huge strips. While there are no front stereo speakers, the One A9 replaces those with a fingerprint scanner / Home key at the bottom and a nicely nested earpiece on top.

The 13MP OIS rear camera at the back is bulging, but that was inevitable - a thin shell and a capable camera often result in a camera hump. It was that or a thicker and heavier body.

Handling the One A9 is a real pleasure - the aluminum unibody feels great in hand, while the curved edges and display don't compromise the handling as others do. The One A9 offers secure grip due to small thoughtful departures of the traditional rounded edges and the grippy matte finish on the all metal back.

Handling the One A9

There is nothing out of the ordinary when it comes to the HTC One A9's control set. The earpiece, the front 4MP UltraPixel selfie snapper, a hidden tiny notification LED and a few invisible sensors are all on top of the 5" AMOLED screen. Below is the lonely capacitive Home key, which also doubles as an always-on fingerprint reader.

A peek above and below the One A9 screen

The fingerprint scanner is really fast and unlocks your phone even when the display is turned off. 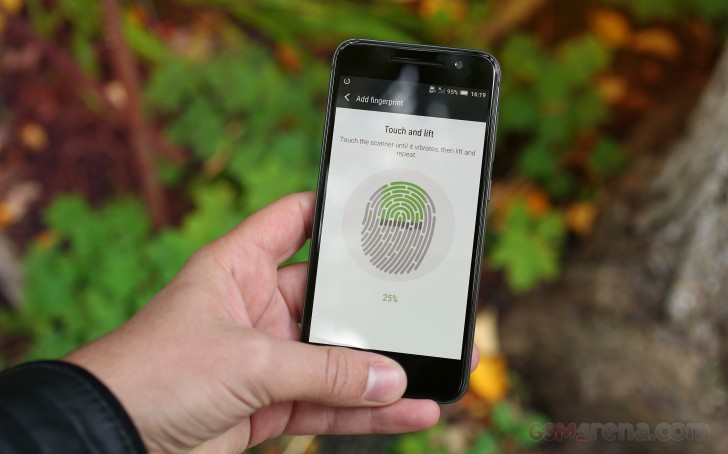 The ejectable microSD and nanoSIM trays are on the left, while the right side of the One A9 has the volume rocker and the nicely textured Power/Lock key, which reminds us of the OnePlus Two.

The right and left sides of the HTC One A9

The top has nothing but a piece of matte plastic, which we guess covers another antenna as there is no IrDA port on this device. The bottom of the One A9 houses the microUSB 2.0 port flanked by the loudspeaker grille and the audio jack. The primary mic is also around the connectivity port.

The top and bottom

The 13MP camera lens and the dual-LED dual-tone flash are on the back, as is the secondary microphone used for noise-cancelling and stereo audio recording during video capturing.

The 13MP camera is on the back