The HTC One A9 has been rumored for many weeks now, first under the codename Hima Aero, then just Aero, and then from one point on using its commercial name. Just recently we found out that it will be a mid-range smartphone, using Qualcomm's Snapdragon 617 chipset, which itself only got official this week.

The Snapdragon 617 comes with an octa-core Cortex-A53 CPU clocked at up to 1.5 GHz, the Adreno 405 GPU, Hexagon 546 DSP, and Qualcomm's X8 LTE modem, capable of Cat.7 speeds, meaning theoretical peak downloads of 300Mbps, and 100Mbps uploads (with carrier aggregation supported both on the downlink and the uplink).

Mid-range as it may be, it looks like the One A9 won't be cheap. At least that's if we go by one listing by one Dutch retailer, which is boasting that it's already taking pre-orders for the device. It's priced at €706.64 including VAT, which is a whopping $800. The phone is offered in four color versions: Topaz Gold, Deep Garnet, Opal Silver, and Carbon Grey. 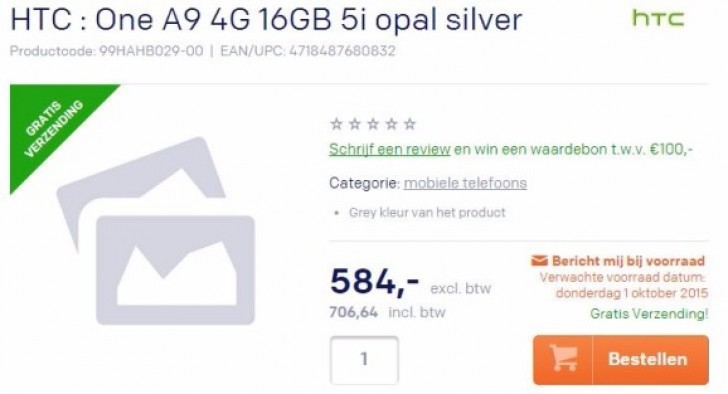 Before you decide whether the One A9's rumored specs (listed below) are worth this incredibly steep asking price, do keep in mind that various retailers like to put up such pre-order pages for upcoming smartphones without actually knowing what their pricing will be - just basically guessing. They get traffic and notoriety by announcing that they're the first to have a device for pre-order, so the usual grain of salt near you should be a pretty big one in this case.

The HTC One A9 will reportedly pair the Snapdragon 617 SoC with a 5-inch 1080p touchscreen, 2GB of RAM, 16GB of expandable storage, a 13 MP rear camera with OIS, a 4 MP UltraPixel selfie snapper, and a 2,150 mAh battery. The handset will have a fingerprint sensor, and it might run Android 6.0 Marshmallow. It could become official at an event that's taking place on September 29.

HTC is totally lost. If they are delivering a phone with just 16GB of storage it will be a failure even if it has a SDCard slot with all "Move to SD" nightmare. They started good with the HTC One M7 and they lost track trying to copy Apple. Apple off...

well its cheaper than the iphone

I'll buy it if its 5.5, capacitive buttons,and headphone jacks on top OIS,DIS, good stand by time, great battery, and it under $700 with tax.