What if you stripped the HTC One (M8) of the metal armor it's so proud of. Imagine replacing it for plastic. Sounds like the worst thing that could happen to the top model of a struggling company. The HTC One (E8) will heartily disagree. If anything is lost, it's mostly weight, not dignity. For all we know, this edition feels like a refreshed version of the flagship complete with a new polycarbonate back, but with the same software package and even some extra processing power and a camera that's better by our books.

The HTC One (M8) is one of the most beautiful flagships of this generation. Perhaps not as feature-rich and inventive as most competitors, the One is still the one to beat for looks. The all-aluminum unibody is a pleasure to behold and has a matching feel in hand. The HTC One (E8) tunes in and offers and alternative reality version of what the second iteration of the One could have been.

Ok, in practice, the One (E8) is expected to be targeted at price-conscious consumers who found the HTC One (M8) too cost-prohibitive. And it won't even be available everywhere.

The newcomer is nonetheless powered by a more recent, 3rd generation Snapdragon 801 chipset and HTC does well to replace a thoroughly disappointing 4MP Ultrapixel camera with a more standard 13MP sensor. 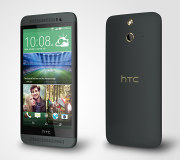 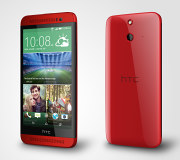 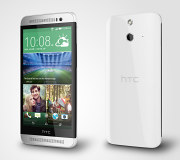 While it can be viewed as a step down in the design department, the One (E8) is an important weapon in HTC's arsenal - a more affordable flagship to help HTC regain some market share lost to competitors like Samsung, Sony, and even Apple.

Here's a quick look at what the HTC One (E8) is all about:

To keep costs down, we see that HTC has omitted a few other extras as well, mostly in the connectivity department. The centrally-located power button no long doubles as an IR-port for controlling TV's and other appliances, while the new 802.11ac wireless standard isn't supported either, nor does the microUSB port offer MHL TV-out connectivity or USB On-the-go.

HTC does make up for this by throwing in a 13MP camera, like you'd find on the likes of the HTC One mini 2 or Desire 816. We saw vastly improved imaging in those devices compared to the 4MP UltraPixel of the M8, and we're hoping to get the same here.

Equally important is the shift from the metal-clad unibody to polycarbonate. There are both poor- and well-built plastic phones, so we'll be taking a close look at the HTC One (E8) from a design standpoint to see where it sits in that regard. Join us on the next page where we'll do just that.

HTC was once a big company yet now is facing it's sunset, eclipsed by the other brands' overwhelming marketing superiority and competitive price. Nowadays we hardly see remarkable breakthroughs in any of the HTC flagships in its price range

I Realy like it. It's my first time but I have seen the reality.....HTC company big up.