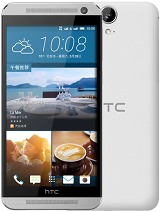 Sense home has stopped unexpectedly.an error report will be sent to htc to help us improve our products

The camera quality is great. HTC always wins in terms of their camera.

This phone is trash...same day I bought it I tryed to enter youtube and it crashed and bugged whole phone and every time when I want to open video on youtube it stops whole phone and uyou must press home button milion times to exit youtube.I will not speak about battery becouse other comments told enough about it...RAM is catastrofic and when you enter chrome it will pop up millions of other sites and phone is terrible slow...I would rather have phone for 10€ on buttons than this shit.From day I bought it I regret and if u want normal phone keep your look out of any HTC belive me.

My Dad has this phone. I have to say it sucks with its pre-installed bloatware it still, upto this date is with the android version 5.0 lolipop it sucks! big time.....

this is a terrible phone i have ever heard ,whoever invented it belongs to jail,
you tube has stopped is the norm,takes 6hrs to charge ,while it takes only 4hrs to lose all the power. it is a total waste of money,and dont dare go HTc route ,leave alone thinking of buying this crap invention called HTC e9

This phone is gabbage!!!
6 months down and the phone shuts down at will.
'You tube has stopped' is my worst, you actually have to factory reset every two days just for it to work!!!
Camera pixels are just never uniform!!!
Anyone whos had a similar issue with it to help me out

I read so many opinion, Many people says.. Charge not stay long, camera not good, touch not well. But I m using this phone from last 4 month and as per budget It's best phone. I think this is the best phone within the amount. .Love HTC...

This phone is ok .The battery sucks an it has an overheating problems and you can only play one high graphics game when I play asphalt Xtreme at beginning it's ok after you get better cars and better it starts to lag and the vynl is comes after few seconds.(THIS IS NOT A PHONE FOR GAMING)clash of clans and clash Royale and any game under is great. Otherwise this phones great .I especially like the camera and it's editing app is good very fun to use it.the sound quality is great I mean awesome . (I RECOMMEND YOU TO BUY THIS BUT ITS NOT FOR GAMING IT WILL OVERHEAT WHEN GAMING ND BATTERY LIFE​ IS GREAT FOR OTHER USES.I LUV THIS PHONE.😊😊😊😊😊😊😊😊😍😍😍😍😍😍😍😍😍

I watched a review about this phone in which it says it supports usb otg.But i am also curious does this phone support mhl . Any body tried to connect tv or monitor with mhl adapter on this device ?

Do not waste your money on this phone. I am very dissapointed about it. Keyboard is not working properly sometimes, cannot put space between the words sometimes (need to delete a few words back and start typing again in order to make it work), also the move down a row has some issues sometimes + the letter b which no matter how much I am going to press it it's not working (need to delete again a few words and start typing again). The sound is horrible if you want to listen to music from the device and youtube sound needs to be at half (not more) in order to get a decent sound. The battery lasts for about a day while usingthe internet just for 2h + 1-3 calls a day. It drains out very fast once it reaches 30% and drops almost instantly from 19%to 5%. Cannot remove the vibration feedback from the 3 main "touch icons" even though the one from the keyboard is not on anymore. Phone freezes sometimes.... the only good thing about it is the camera which does some pretty good pictures most of the times (It does happen sometimes for a photo to be completly black). I purchased this phone 5 months ago and it started to have the problems after just 1 month with the keyboard. The sound was like that since I bought the phone and the black picturea after 3 months or so. Waste of money! My first and last time with HTC!

Total of 118 user reviews and opinions for HTC One E9.
ADVERTISEMENTS