If you want HTC's highest-specced, big-screened QHD smartphone, the One E9+ is very likely the one you're looking for. Only the lack of the signature all-metal unibody saves the company's reigning flagship a good deal of embarrassment. 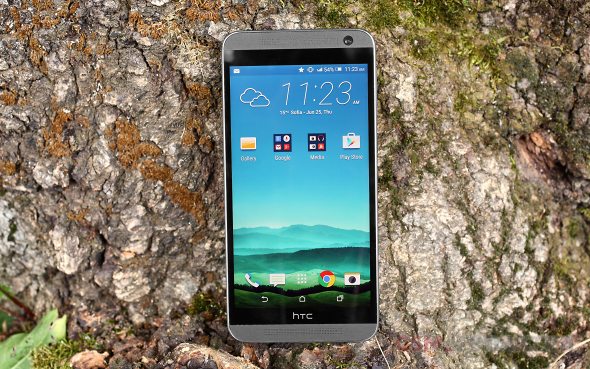 It's quite hard to actually decide which precise model sits atop HTC's 2015 One lineup, and there may well be more than one correct answer. You have the M9, obviously, which has Qualcomm's latest chipset inside and the metal design to appeal to your sense of style, but sticks with a FullHD 5-inch screen.

Midway up the size ladder, you'll find the 5.2-inch QHD M9+, which retains the metal unibody and adds a second camera on the back, as well as a fingerprint sensor, but opts for an arguably inferior Mediatek chipset. There's an almost identical ME version, which comes with a single rear camera, and comes with a polycarbonate body.

All that builds up to the HTC One E9+, which has finally landed in our hands. It has the largest 5.5-inch QHD screen of the bunch (so, not to be confused with the E9, which is apparently a China-only 1080p 5.5-incher), a slightly downclocked version of the same Mediatek chipset and a polycarbonate build.

With the family relations (somewhat) settled, let's move on to the list of key specs.

You can see why one might get confused. The HTC One E9+ has all the makings of a modern day high-end device, albeit in a rather understated package. And it's not like HTC hasn't done it before, last generation's E8 was just that - a flagship in disguise. Only, now HTC is giving you even more options and it's not a simple price-vs-looks dilemma.

It is, however, the first time we get to see the Mediatek MT6795 in action (also going by the PR-friendly Helio X10). It's an interesting decision by HTC part to equip all its QHD smartphones so far with the Mediatek top-of-the-line solution and reserve the Snapdragon 810 for the FullHD One M9.

We've yet to see what that means in terms of performance, but not before we've unpacked the handset and got a real feel for it in-hand.

it is the issue of wifi and blutooth IC. you need to change it than it will work

The screen is weak

my htc e9+ is 3years old my bluetooth and wifi stopped working why? please help.