HTC finally abandoned the UltraPixel concept for its primary cameras with the One M9, and the One E9+ employs the same 20.7MP 1/2.3" Toshiba sensor. It produces photos up to 5,376 x 3,744 pixels in a rather unorthodox 10:7 native ratio.

The sensor sits behind a 27.8mm-equivalent f/2.2 lens, which is a smidge wider than the 28mm glass of both the Galaxy S6 and LG G4, but is considerably dimmer. There's also no optical stabilization. 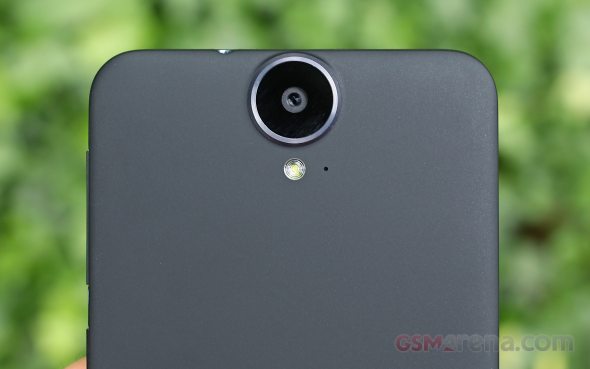 The shooter's interface is the same as on the One M9, which was in turn borrowed from the previous generation. Your choice of shooting modes includes: Selfie, Camera, Panorama. You can add more shooting modes though - the available options are Bokeh, Photo Booth (4 snaps in a grid) and Split Capture (dual-camera capture).

The One E9+ is also capable of taking HDR stills, macro shots, there is Night mode, and even Manual mode is available. There are also settings for maximum ISO, exposure compensation, white balance and image adjustments.

A long press on the screen will lock exposure and focus. You can set the volume rocker to act as a zoom lever or a shutter key.

What we said a couple of months ago about the One M9 largely holds true for the E9+ today. The images contain a lot of detail, though noise levels are higher than what we would have liked.

The sensor proved to be somewhat lacking in dynamic range and that doesn't change when you stick it a new body. Difficult high contrast scenes like the fifth sample will inevitably leave you with pitch-black shadows.

The hardware on the One E9+ may be the same as on the One M9, but there are still some differences in processing. The output of the E9+ is warmer and a lot more saturated, when compared to the M9. In all fairness, perhaps the M9 is closer to reality, while the E9+ has a bit of a yellowish cast.

Additionally, the M9 applies noticeably stronger sharpening, so the E9+ images appear a lot softer. We shot the same scenes with the M9 we had at the office within seconds from the E9+ so you can see the differences for yourself.

The HDR mode on the E9+ aims to help with dynamic range and develops the shadows, but also tends to blow up highlights. Additionally, the images get a boost in sharpening. Overall, the result is usable, not overly dramatic and generally pleasing.

The One E9+ wasn't happy with focusing very close, neither in Auto, nor in Macro mode. The sample below is as close as it would get, and it stubbornly refused to lock focus on the knight's face, instead choosing its left elbow.

Close-up shot with the main camera

The front-facing shooter is a 4MP UltraPixel module. It is very similar to the main camera of the One (M8), but it doesn't have auto focus. It also comes with a BSI sensor, an aperture of f/2.0, a 26.8mm wide-angle lens and is capable of 1080p video recording.

You can also head on to our photo compare tool to see how the HTC One E9+ stacks up to the competition.

HTC One E9+ in our photo compare tool

HTC One E9+ is capable of capturing 4K videos at 30 fps, as well as taking 1080p clips with 30fps or a rather odd frame rate which fluctuates around the 50fps mark (Fast FHD). Additionally, there's a slow motion mode, which captures 720p at 120fps, but saves it at 30fps, so get a video at quarter speed.

The video recording has its own button in the camera interface. While convenient, this unfortunately, makes framing a video correctly impossible until you have started recording. This genuinely annoying issue has to do with the fact that the still camera and the video camera have seriously different fields of view (they don't fit the same portion of the scene) and you only get to see the video field of view after you've started recording.

Even more annoyingly, 4K recording has a much narrower field of view, and our guess is it uses the central portion of the sensor cropped to 2160p. It's also capped at 6min, and you get a backwards counter, contrary to all other modes.

The 4K videos from the main camera have a 55Mbps bitrate and the audio is recorded in stereo with a bitrate of 64kbps. The 1080p videos have a bitrate of 17Mbps, while their audio stream is at 192Kbps bitrate.

The 4K video quality is the same as the still images - there's plenty of detail, colors a touch on warm side, and dynamic range is limited. Interestingly enough, we couldn't upload one on Youtube, but you can go ahead and download a sample below.

The 1080p sample contains a bit less detail than we're used to at this point, but it's still usable when the sheer size of 4K videos may be a burden.

You can check out a sample from the nifty slow motion video below, which will be appreciated by sports enthusiasts.

HTC One E9+ in our video compare tool