HTC One M8 and M7 GPe are getting Android Lollipop today

After a two week delay on the initial release date, today is the day that HTC's Google Play edition One M8 and M7 handsets finally receive the long anticipated Android Lollipop update. Users are already reporting, that they are receiving that over-the-air. The new version is rather surprisingly a LRX22C build, based on Android 5.0.1, so it appears that HTC will be skipping Android 5.0 altogether.

The long update saga surrounding the two devices started in mid-November. Since then, numerous testing issues and bugs have postponed the roll-out, which was set for November 21. Early morning today HTC's Product VP Mo Versi announced the good news and just as promised, updates started to appear around noon. 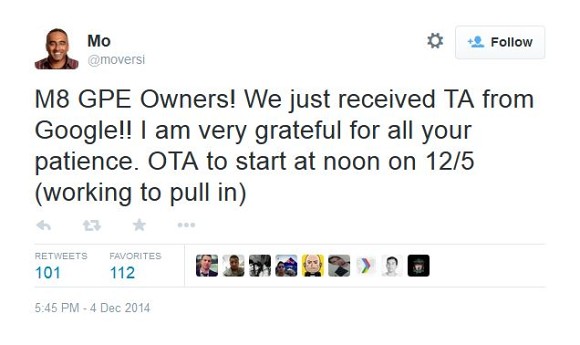 The Android 5.0.1, that is being shipped is roughly 500MB and if you simply do not wish to wait for the OTA to arrive, it can also be downloaded from the following links for HTC One M8 GPe and HTC One M7 GPe, respectively and flashed from the stock recovery.