HTC One (M8) getting Lollipop in India as we speak

The HTC One (M8) is receiving its Android 5.0 Lollipop update in India. We received a screenshot of the system update changelog and it's based around the 4.18.720.8 firmware which amounts to 574.17 MB. That's less than the 780MB update users received in Europe although the changelog doesn't state a difference. 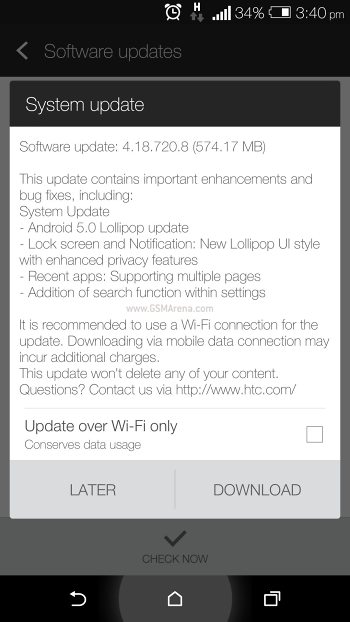 Users will get the Lollipop HTC Sense experience with a redesigned notification area will pull-down quick settings toggles, the carousel recent apps with bigger cards, the new Lollipop lockscreen, a search button in the settings menu and many other little and big improvements.

HTC is steadily upgrading its One (M8) - it has been receiving the firmware update to the latest Android version since last month but some devices will get a delayed update due to some issues HTC and Google are working on.

And if you want to check out how Android 5.0 Lollipop improved the performance of our HTC One (M8) you can check out our dedicated post.

Thanks for the tips, everyone!

Same problem mobile hang what to do

Guys satizfied lollipop in m8eye ?????.me also using m8 eye and get lollipop updation to 5.0.1 ,its struk in evry time.what is the solution for this if anyone knows solution please share me.