HTC is preparing the new generation One flagships and it has been known for a while that there will be two versions. A benchmark called Compubench has leaked the specs of both, the HTC One (M9) and One (M9) Plus, confirming what we've seen so far.

The camera department on both will be almost identical with a 20MP main camera, there will be no Duo cameras this time. The selfie camera had previously leaked as a 4MP UltraPixel shooter, but this benchmark detected a 12MP selfie camera that records 2160p video on the One (M9). The selfie video capture on the One (M9) Plus is capped at 2,048 x 1,536px.

The HTC One (M9) Plus will have a sharper display – QHD (1,440 x 2,560px). The benchmark reports it as 5.1", but that contradicts earlier rumors and since these scorecards often get size wrong we'd be more inclined to expect a properly larger screen. Where we can trust the benchmark is chipset detection and so the One (M9) Plus will use a MediaTek MT6795 chipset. That one is based only on the smaller Cortex-A53 cores, eight of them, 3GB of RAM and packs PowerVR Rogue G6200 chipset (the GPU used in Meizu MX4). 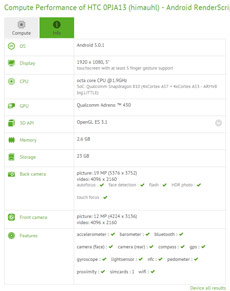 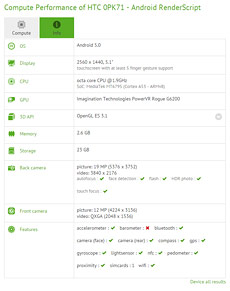 Both phones will launch with Android 5.0 Lollipop and will have 32GB of built-in storage, 23GB of that available to the user.

Note that we're also expecting an HTC Butterfly 3 with a 5.2" QHD display, which is a separate device from the One (M9) Plus. We should see the whole roster unveiled on March 1.

Is HTC a chinese company? I mean, MediaTek? Are they trying to reduce costs too?

Most likely yes to OIS being back again.