Just yesterday we got the first ever leaked photos showing HTC's flagship for this year, the successor to the One (M8) from 2014. These obviously haven't been confirmed yet, but they do look pretty believable.

The next One could be sold as the One (M9), and it's been reportedly codenamed Hima. The handset looks incredibly similar to the One (M8), a fact which has been made even more obvious by the image you can see below. This is a comparison shot, with the next generation phone on the left and its predecessor in the center. 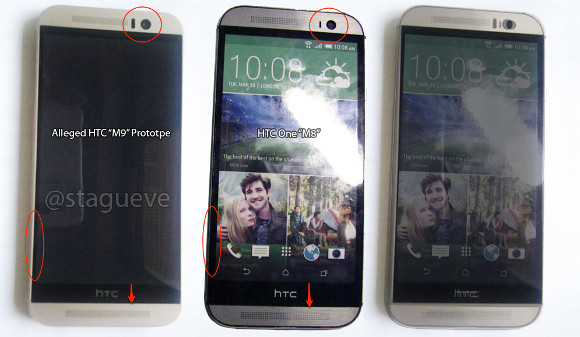 You should probably disregard the fact that the Hima looks quite a bit smaller than the One (M8), since it's not clear if this is an actual photo of the two lying side by side, or a composite image made up of a leaked shot showing the Hima and another image portraying the One (M8).

That said, the new device obviously has much smaller bezels, so if the screen size does indeed stay the same at 5", then the Hima could at least be narrower, if not a tad shorter too.

The design of the speaker grille underneath the display has changed somewhat, from generation to generation, as has the look of the front-facing camera and the sensor array sitting next to it above the screen.

If you care about removable battery it doesn't mean that other users care about it too. Please don't generalize a thing as it like the world revolve only for you! And I like the finger print scanner too but what is the trade off?... sacrificing ...

If you care about removable batteries it doesn't mean that other users care about it too. Please don't generalize a thing as if the world revolves around you! And I don't care about the finger print scanner! but i also never said it is not impo...

How else are you going to get twice the battery life without charging? I'll give you a hint, it's not going to be your brightness setting. People use phones in different ways under different circumstances and I'm sure you are smart enough to und...