HTC One (M9) leaked again, this time in a Dot View case

The HTC One (M9) is due to be officially announced at the Mobile World Congress in Barcelona in the beginning of March. Still, we're only a few leaks away from being able to draw a complete picture of the upcoming flagship.

This next piece of the puzzle is brought to us by an HTC employee, who chose (or was he encouraged?) to share live images of a Dot View case on Chinese social site Weibo. HTC's official case, photographed from the back, confirms the large camera lens, that's been also visible in numerous previous leaks. 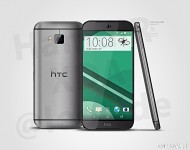 The front raises a few questions, though. A recent supposedly official image showed the selfie camera placed along the central axis of the phone. The pictured Dot View case, however, has the cutout on the front slightly to the right. It's not in the same position as the One (M8) so that's not the previous generation case, either.

We recently showed you the chassis of the One (M9) in gold attire as well as aftermarket protective cases, both confirming the large camera lens on the back. However, not a single live image has surfaced of the front just yet, so HTC might surprise us after all.

How is your m8 better designed? The m9 moved the power button to a better placement on the side, that way it's not so hard to reach. The m9 looks quite a bit thinner than the m8. The bezel size has been shrank substantially and most of all that &quot...

Nothing new or innovative from HTC. Unless they can design dual-screen Smart Device!

i think m8 is better