The upcoming HTC One (M9) flagship made an appearance in the Geekbench 3.0 benchmark database. The smartphone achieved single and multi-core scores of 1232 and 3587 respectively. 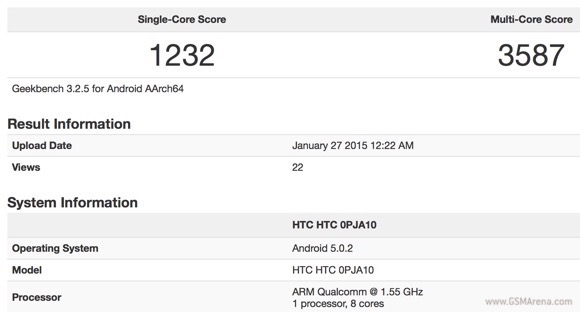 It is worth noting that the result of the HTC hardware is lower than the alleged score of Samsung Galaxy S6 we encountered earlier (1520 single-core and 5478 multi-core). The Korean offering ran on Exynos 7420 chipset.

HTC will announce its next flagship smartphone during MWC in Barcelona. Purported live photos of the handset have already leaked out on several occasions.

Even though the M9 plus will have a fingerprint scanner...

Do you know this rumors are true? Your samsung galaxy s5 was washed out by htc one m8. Besides htc one m7 was declared as the smartphone of the year 2013. And after releasing, htc one m9 will blow your galaxy s6.

Seriously? On a kitkat running phone? Btw, My bubble didn't burst yet, I do use a HTC D816(You thought i was a sammy fanboy?)..