HTC Zoe is enhanced in Sense 5.5

HTC Zoe is more advanced than any other gallery on a phone and it was made possible by the dedicated ImageChip 2 that the One Max uses. When you use the camera in Zoe mode, every time you press the shutter key, the phone captures up to 20 full res shots and a 3 second video (1 second before you press the shutter key and 2 seconds after). All that information is required for the advanced features of Zoe.

Refreshed gallery • Events view is where Zoe comes in

One of those features is Events. Zoe can be used as a regular image gallery with photos stacked together by folders, but Events groups photos by when and where they were taken. Each event has a 30 second highlight video, which is stitched together from those 3 second clips plus a slideshow, including some of the pics. You can remove clips and add new ones to the highlight video, add a video effect and also include a background music (the tracks are preset, though it is possible to add new ones to the list).

The Gallery UI is updated in Sense 5.5 and is now navigated by sliding the panes left or right, instead of the dropdown menu of the previous version of Sense. HTC's Video Highlights feature is at the forefront of the Gallery interface and shows your latest snaps and videos in a flashy way.

You can easily edit the Video Highlights, too. HTC offers you to adjust the video playback speed, select which videos and photos get played as well as add music of your choice. Naturally, there are some predefined themes (12 in total) as well, if you don't feel like doing too much work.

Creating a Video Highlight is easy

Creating Video Highlights on the go is also an option as by just picking one image the One Max will offer you similar ones. It's quite accurate and reliable as well. Best of all, it's not restricted by time and can be any length you want.

The animation in the Gallery is seamless which is more than we can say about it outside the HTC One Max. If you save the pictures into your PC you're left with 20 shots for every Zoe animation created. The good news is HTC allows you to upload the sequences to HTC's Zoeshare webpage and send the links to your friends. Images there are displayed like GIFs.

Yet another feature is called Sequence shot. It takes a shot of a moving object and it creates a cool effect "multiple exposure" effect where that object appears several times on the photo. It's perhaps easier to show the effect than explain it, here's a shot of a BMXer jumping over a ramp. You can tweak the effect by adding and removing clones.

The Zoe arsenal of effects doesn't stop here - there are some vanity effects too. One such effect is Face contour, which allows you to easily slim someone's face. There's also Skin smoothing, an automatic lightning fix, Eye enhancer (which makes your subject's eyes open wider), Eye brightening, Red-eye removal and Anti-shine. The strength of these effects is adjustable with a slider so you can fine tune it.

The photo editor feature also lets you create GIF animated images from videos. The interface for creating them is simple enough by providing a slider with handlebars that adjust the length of the GIF. You can also adjust the speed, direction of play as well as apply different effects.

That's just the Retouch section of the Photo Editor. There are also effects, frames and transformations available. Basically, Zoe is a knowledgeable Photoshop helping hand in your pocket.

As we said, Zoe events can be shared on the dedicated Zoe Share site and we've prepared several albums to share with you: Album 1, Album 2, Album 3.

As before you can find a map with your Geo-tagged images in the Gallery.

The Video player on the HTC One Max has a pretty simple interface. There isn't even a dedicated app, you just pick a video from the gallery. Anyway, you get a Play/Pause button and a slider to scrub through the video, a button to launch the camera and a small square with the current time and battery charge. Those automatically hide after a few seconds, of course.

The video player can use the Beats audio sound enhancement just like the music player, which is great for watching videos. The video player supports DLNA and you can use an MHL adaptor to plug the phone into a TV.

One pretty unique feature allows you to change the playback speed of the video. This is helpful for clips, you've shot in one of the high frame rate modes, it allows you to watch either a High Frame Rate (it playbacks in real-time, just like The Hobbit) or in slow motion.

The HTC One Max failed pretty miserably when it came to codec support . It couldn't play all our DivX videos save for one, MOV files were out of the question and did choke with some audio codecs (like AC3).

The videos that played did so up to 1080p, which is a given with this CPU but still deserves a note. With a large display like that the HTC One Max is some proper codec support away from becoming a powerful tool for watching video on the go. Luckily there are a few dozen video players in the Play store to address that deficiency and some of them are even free.

The HTC One Max comes with a custom music player, which, as we said earlier, isn't Beats enabled. It can organize your music library by Artist, Album, Songs, Playlists, Genres, Podcasts or Folders (we don't see this option very often). The phone will also easily stream songs over DLNA, you're not limited to the music library you have in the internal memory.

Just like the Gallery app, the interface of the Music app is also swipe based. This makes navigation easier as it doesn't require you to reach the dropdown menu that was present on Sense 5. Anyhow, the rest of the interface has remained unchanged.

The HTC One Max doesn't come with BeatsAudio sound enhancement but we found that to have no negative effect on the audio output quality. Unfortunately, there no equalizers whatsoever in the Music player making it harder to tune the music the way you like it. Nevertheless, there are plenty of apps on the Play Store that offer this functionality.

Aside from the headphones or loudspeaker choice you also get Mono sound if the reception is poor. There's no Beats enhancement here, however, not is there a playback control card on the lockscreen.

You can also go with TuneIn Radio. It relies on your internet connection and can play just about every station on the planet that's gone broadband (let's face it, most of them are). And the quality is arguably even better.

Finally, you can also set your alarm to wake you up with your favorite station. Keep in mind that you need an active connection for this and it does tend to take the life out of your battery fast in the morning.

The fact that HTC One Max lacks a Beats audio label got quite a few people worried that it might not be able to match the audio output of its One sibling. As it turns out there was nothing to worry about, though, as the phablet has some of the finest audio in business.

When connected to an active external amplifier, the One Max deliver flawless output with no weak points whatsoever. All the readings are perfect and the volume levels are great - a combo none of the One Max competitors can deliver.

More impressively, there's virtually no distortion when you plug in a pair of headphones. Except for the very minor bump in stereo crosstalk the output is unaffected. And even that is only detectable if you have lab equipment like we do. A stellar overall performance by the One Max. 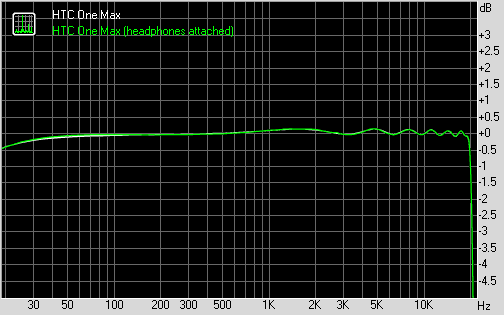