The One Max, which was released by HTC back in October 2013, has started receiving the Android 5.0 Lollipop update. 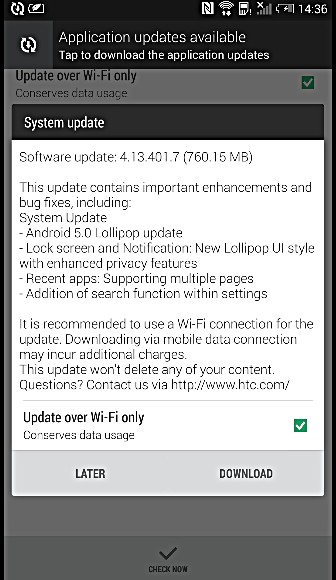 Weighing in at around 760MB, the over-the-air (OTA) update is currently rolling out in select Asian and European countries, including Taiwan, France, Italy, Poland, and Czech Republic.

For those who aren't in the know, according to a previously leaked schedule, the One Max was expected to start receiving the update back in March this year.

you guys have been saying this for ages now, but we did not get any update till today. i have htc sense 6.0 as you say but still can receive lollipop update not saying of marshmallow

NYC, USA: I've been waiting for a next gen HTC One MAX and that is probably never coming - so at least let us get Lollipop; and still that hasn't come for us either.. It is now July 15, 2016 - and still NOTHING! WTF Sprint?!?