The front of the HTC One mini follows the established design used by the regular One and the Butterfly S. The whole front panel is protected by a layer of Gorilla Glass 3, which is the latest generation of the protective glass, and should do a nice job of keeping scratches away or at least make them less visible.

There are two capacitive keys below the screen - Back and Home - and a speaker on either side of the display. Next to the top speaker is the front-facing camera (1.6MP / 720p) along with proximity and ambient light sensors.

BoomSound speakers above and below the display • two capacitive keys

With Android version 4.2.2 you can long press the Home key to activate the Menu, instead of having an on-screen button that eats into the usable screen space. The HTC One got this as an update, but the mini stayed in the R&D lab long enough to get it out of the box (actually, it was part of the pre-release software for the One too, until HTC decided to remove it).

The top of the HTC One mini features the Power/Lock key (sorry, no IR function this time around), the 3.5mm audio jack and one of the two mics. The bottom of the phone holds the second mic along with the microUSB port (note that this port isn't MHL-enabled like on the HTC One).

The two mics are used for stereo recording in videos but work with Sense Voice too. This feature keeps track of how loud the environment is during a call and ups the gain on the mic to make sure the other side can hear you.

The left side of the One mini is where the microSIM card tray goes. The right side has two volume buttons instead of a single rocker key, an uncommon design.

We get to the back. Aluminum spans the entire surface (save for two thin plastic strips) and comes in either naked metallic grey or in painted black (at launch anyway, we might see a Red version later on). The camera and its flash are the main points of interest on the back, but the Beats Audio logo reminds you that the phone provides a high-end audio experience.

Anyway, back to the camera. It has a 1/3" UltraPixel sensor with 4MP resolution (16:9 aspect ratio). UltraPixel refers to the larger than usual pixels on the sensor - 2 microns on a side, bigger than the standard 1.4 micron and 1.1 micron pixels in most other cameras.

The extra large pixels, the backside Illuminated (BSI) sensor design and the fast F/2.0 lens promise great low-light performance. The LED flash can be fired in one out of five power levels, depending on how close you are to your subject.

The back holds the UltraPixel camera, LED flash and the two logos

The camera on the HTC One mini uses the same ImageChip 2 as the big One. This chip handles a lot of the special processing needed by the camera (so the less powerful chipset shouldn't matter), including recording 3 second videos each time you take a photo in Zoe mode. These videos are stitched into cool 30 second Video highlights. The chip also records what is necessary for the Always Smile and Object Removal options.

What's missing is the Optical Image Stabilization - outside the flagship Nokia Lumia phones, the HTC One was the only phone to offer it. It remains its exclusive feature though as even the big HTC Butterfly S doesn't have it.

The HTC One mini features a 1,800 mAh battery, which helped it achieve an endurance rating of 40h in our test. That's not a particularly great score, but it still means you will be able to go through a day of usage with no trouble. 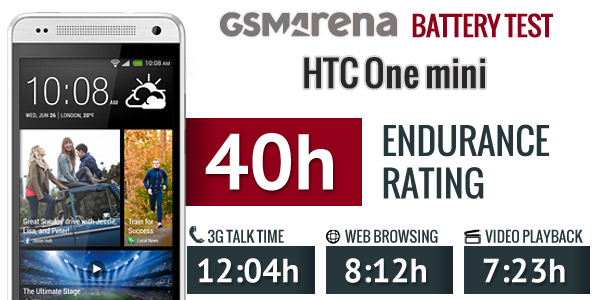 You can find the complete breakdown of the One mini battery performance over here in our blog.