HTC One Mini gets caught posing for the camera once again

The HTC One Mini has made yet another appearance in front of the camera. This time around, the upcoming mid-range offering got caught next to its bigger brother in a matching color. 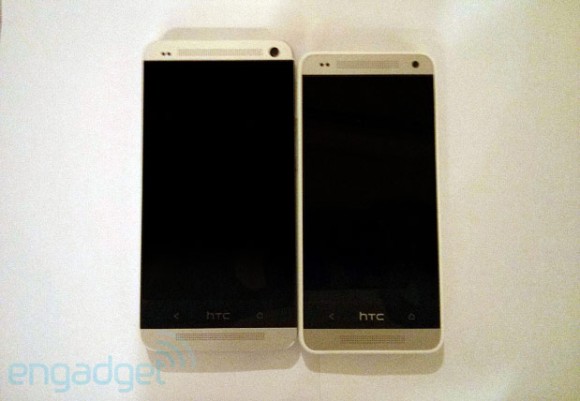 The fresh batch of rumored specs for the HTC One Mini fall right in line with previous reports. The upcoming smartphone is said to feature a 4.3" display (likely a 720p unit), and a 1.4GHz dual-core CPU (a Qualcomm Snapdragon 400 is widely expected). The camera is tipped to be capable of capturing Zoe share and 1080p videos, though no further details were given this time around. The OS on the leaked device is Sense-d Android 4.2.2 Jelly Bean.

The HTC One Mini will feature the gorgeous aluminum body of its flagship sibling. The Mini however will have a plastic ring around it, as seen in the image above, and no IR remote.

The HTC One Mini is expected to go official at some point in Q3 this year. Given how little is left to our imagination this far, we doubt it will be a long wait.

how much megapixel of camera for this phone?

Ok it looks like an iphone maybe confused iphone 5. Regardless of that with it being mid ranged it comes down to price and size of the phone. To determine the success of this phone. I personally think they have managed to snatch ugly from t...

The black one looks good, but the white one looks pants.