We now move to what is arguably a camera review's most important part - image quality. We've prepared a bunch of crops, which should help you evaluate the detail that the two smartphones resolve.

To make it easier for you we've upscaled the HTC One mini 4 MP samples to 8 MP ones on the Samsung Galaxy S4 mini so you can easily see how the resolved detail compares.

The Galaxy S4 mini comes a clear winner here, its images turning out much sharper than those of its competitor. The One mini is limited by its lower resolution sensor and fails to mount a serious challenge here.

Color balance is not perfect on either smartphone, but the One mini comes a tad closer to the truth than the Galaxy S4 mini. Surprisingly, though, the larger pixels don't help the HTC smartphone when it comes to noise - if anything it does worse than its Samsung rival. 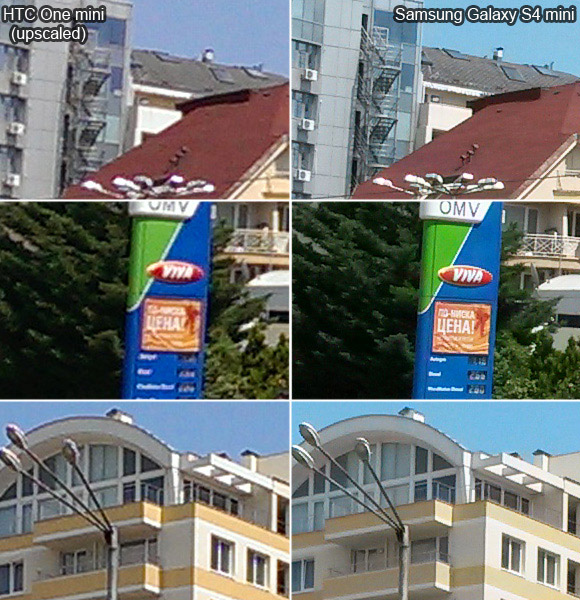 We've also added a bunch of downscaled crops that show you how the photos from the two smartphones will differ if you only post them on social networks and never do much pixel peeping.

In theory downscaling results in lost detail, so the HTC One mini should favor better here, but as it turns out it's still a distant second in terms of resolving power. It's also the noisier, and while the color reproduction doesn't change with resolution, the HTC smartphone is still unable to catch up with its rival. 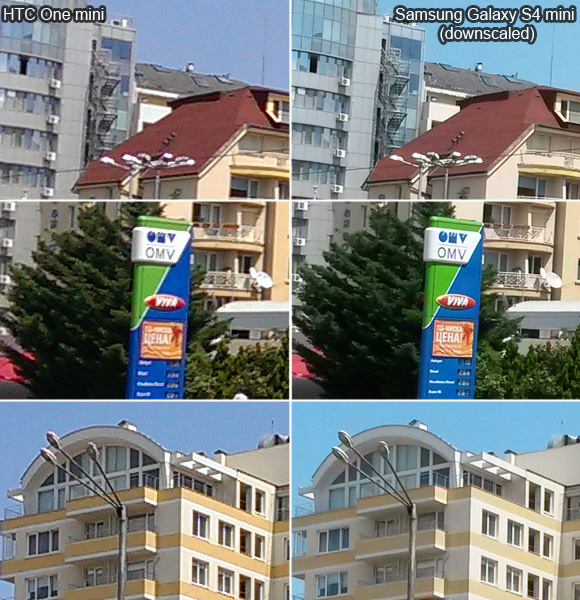 High Dynamic Range imagery is a department in which HTC and Samsung have very different track records. While HTC has struggled in making a well working HDR feature for its smartphones, Samsung is pretty much up there with the best.

The Samsung Galaxy S4 mini produces excellent HDR samples, adding just enough extra detail in the highlights so images don't turn out unrealistically flat, but still look much better than the regular ones. The HTC One mini, on the other side gets the whole thing all wrong and actually loses detail in the highlight areas. It does develop the shadows much better but what you get in the end looks more like overexposed image than a proper HDR sample. 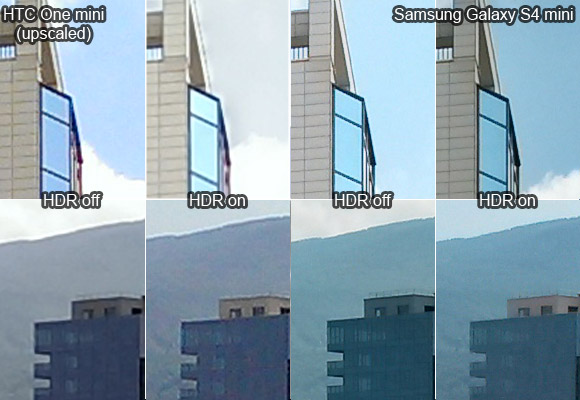 We've also giving you the full-res samples so you can compare them at will. The first batch belongs to the HTC One mini.

If you want to check out the full-res HDR shots of the two minis you can do so below.

As for macro shots the HTC One mini has a dedicated macro mode while the Galaxy S4 mini determines whether you need macro while you're focusing. If it detects you're closer than normal it will enable macro shooting, which is the more convenient solution.

Here we're rather pleased with the HTC One mini output, which is almost as good as the the Galaxy S4 mini samples.

So the Samsung Galaxy S4 mini has the better snapper in just about every case. With the OIS gone, the One mini can't even hope to get back at it when it gets dark outside.

Winner: Samsung Galaxy S4 mini. The OIS-enabled UltraPixel camera of the large HTC One did put up a fight against the 13MP snapper of the Galaxy S4, but its downgraded version is downright disappointing.