It's the beginning of what hopefully will become a trend - squeezing flagship specs into a compact package. These two devices are among the pioneers and Android is the playground, but we'd love it if the trend hits full swing and even other platforms join with super minis.

Because as things stand now, HTC and Samsung are the only ones that have the nerve to name them after the current flagship as in "There you go. It's the same package, only smaller." Motorola joins them too and their DROID Mini is actually the closest anyone has gotten to the real deal. The thing is the flagship DROID Ultra isn't quite close enough to the Galaxy S4 and the HTC One to begin with.

Anyway, as first attempts these here minis are far from perfect. This isn't even a first for Samsung but, to be honest, the Galaxy SIII mini was well off target. The Galaxy S4 mini is more like it, and one would think HTC nailed it with the One mini judging solely by the appearance.

The truth is, both flagships in miniature that we've been comparing in this article are missing important features of the originals. Some things just had to be left out - less room in the compact bodies or trying to meet a tighter budget. Or both.

The HTC One mini had to watch OIS go, along with NFC and the IR port. It kept the front-mounted BoomSound speakers though, the hot aluminum unibody and Zoe. The Galaxy S4 mini got stripped off Air Gestures and Multi View, and got its screen resolution down to qHD. NFC and the IR port are staying though, and so is the memory card slot. 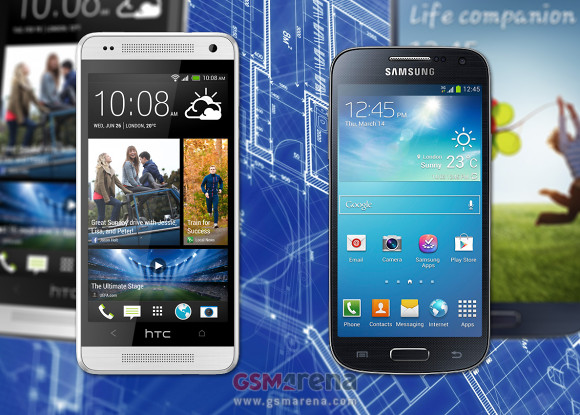 If we judge both devices as the sum of their parts - and we mean the stuff that made the cut, not the missing bits - they're pretty similar in terms of hardware and performance. Yet, the HTC One mini comes across as the package that inches closer to the flagship standard, mostly down to build and finish, and the screen. It seems to show stronger determination than the Galaxy S4 to stay relevant even in the original's shadow.

There's a 720p display on offer and audio quality gets a real boost out of BoomSound and Beats. Then the quality of the finish and the premium look and feel round off a package that's the right bit more refined and sophisticated.

It's like Samsung was afraid that too good of a mini would step on the Galaxy S4's toes. And we mostly mean good-looking. But that's where it gets tricky. The Samsung mini's about 20% cheaper than the HTC mini - enough to probably let the lower resolution and less-than-premium looks slide.

So there you have it - if you care for things like camera, storage and battery backup the Samsung Galaxy S4 mini is the phone for you. The build and finish, audio quality and screen resolution are HTC One mini's bid to match the Samsung offer. Perhaps even beat it?

That depends on who you are and what you need in a smartphone. To us, the HTC One mini seems like the more attractive package - it's just better at making a good first impression. The Galaxy S4 mini has the higher clock speed, superior battery backup and expandable memory but squeezing every bit of processing power, every last drop of juice and megabyte of storage is of utmost importance to power users, who rarely are the target here. Then again, the Galaxy S4 mini is cheaper and is the better cameraphone.

OK, this is beginning to look like the two sides of the same coin. But hopefully - if you stayed thus far - not one you'll need to toss to make up your mind.