The HTC One S retail box feels rather empty compared to some other HTCs we've handled recently. You get the typical diminutively-sized charger that connects to the microUSB cable to charge the phone and a ordinary one-piece headset. That's it.

The contents of the HTC One S retail package

The HTC One S measures 130.9 x 65 x 7.8 mm and weighs 119.5 g. That's a little taller, but noticeably thinner and lighter than the Sensation XE (which has the same screen size and aspect ratio).

The most prominent elements of the HTC One S design are the large Gorilla glass-covered screen and the aluminum back. The back can be had in two different flavors.

We have the anodized aluminum with gradient shades of medium to darker grey (note that this isn't paint, it's the result of the anodizing). The other option is based on an innovative process of giving the aluminum surface a distinct ceramic finish.

The back of the One S looks much more consistently designed than some previous incarnations (the Sensation's back looked patched-up together from different bits) and gets a blue highlight around the camera.

HTC One S is a beautiful phone

The HTC One S screen has familiar size and resolution - it's a 4.3" qHD (540x960) unit. That's the same specs as the Sensation XE, but HTC have gone with a Super AMOLED display instead of S-LCD this time around.

Yes, that means the matrix has a PenTile arrangement, which is offset slightly by the higher pixel density (256ppi), though it's still noticeable. It's one of those things that you can easily live with or be constantly annoyed by. Have a look at the screen in a store and you'll know in which camp you belong, if you don't already.

The HTC One S has a 4.3" Super AMOLED screen with qHD resolution

We've seen this display before on other phones (the Motorola RAZR XT910 is a good example) and we were sufficiently pleased with it. It offers deep blacks, rich colors and great viewing angles as other Super AMOLED screens do.

The display coating is quite reflective and the brightness isn't enough to overcome this on bright sunny days.

Our traditional display brightness and contrast test confirm our observations.


You can learn more about the test here.

Anyway, we have the proximity and ambient light sensors hidden in the black bezel above the screen. There's a tiny status LED under the earpiece grille and a VGA camera to the right of the earpiece itself.

Underneath the screen, we find three capacitive keys with haptic feedback. They are well spaced and very responsive. You might be thinking "What keys? This is an Ice Cream Sandwich device, right?"

Well, it is - but don't forget that the HTC Sense modifications run very deep. And Sense 4.0 doesn't use on-screen controls, it relies on physical Back, Home and Task switcher keys instead, the same set as the ICS on-screen controls.

There's no Menu key, as this is being phased out in ICS in favor of a drop down menu in the top right of the screen.

In case an app hasn't been updated to support the dropdown menu, a single on-screen menu key is displayed at the bottom of the screen. That's not a perfect solution though as you lose a line of the screen (on ICS it's displayed on the same line as the other on-screen controls, so you lose nothing).

Moving on, the left side of the One S features an exposed microUSB port. It serves multiple functions - data connection with a computer, charging and MHL connectivity. If you have an MHL to HDMI dongle, you can easily hook up the One S to a TV.

On the right there's the volume rocker. It's quite thin but it's also long, making it comfortable enough to use. No, there's no shutter key - HTC don't do that on their droids.

At the top we find the 3.5mm audio jack and the Power/Lock key, which is easy enough to press when needed but secure against accidental taps. There's also a small notch that helps you pop the top plastic cover open.

3.5mm audio jack and a power/screen lock key on top • The microphone pinhole on bottom

The back of the HTC One S features the 8MP camera (with a blue or red metallic trim) and an LED flash right next to it. The area around the camera protrudes slightly, so you have to be careful not to smudge or scratch it.

The loudspeaker is located on the second plastic panel. Since there's nothing to lift it up, it gets muffled when you place it on a level surface.

Beneath the top panel is the microSIM card slot. There's no memory card slot and you can't access the battery either.

Once the top back panel comes off, you can access the microSIM card slot

The battery is a 1650mAh unit, but HTC didn't provide any official battery life numbers, but we ran our own battery test.

The endurance rating for the HTC One S works out to 35 hours. That means you have about a day and a half before you’ll need to recharge it, assuming you talk for one hour, browse the web for another hour and watch an hour of video each day.

Individually, you get 9 hours and 42 minutes of 3G calls, a bit over 4 hours of web browsing (phones with AMOLED screens rarely do good here) and and about 9 hours and a half of watching movies.

The rating doesn’t seem impressive, but that’s due to the relatively poor performance of the One S when it comes to web browsing. If talking and watching movies is all you do, it will last a good deal longer than a day and a half. 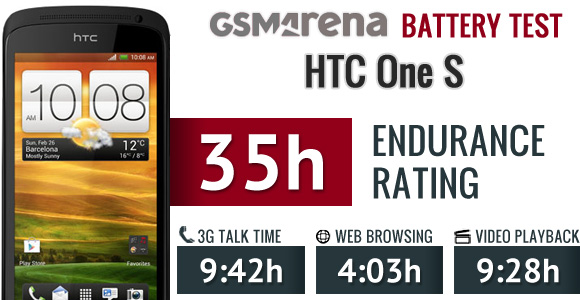 You can read more on the One S battery test over at our blog.

The One S isn't a small phone, but the times have changed - compared to some of the other droids out there, the S is almost compact. The aluminum back scores coolness points but more importantly provides a pleasant, fingerprint-free and grippy surface.

The phone is easily pocketable and feels very nice in the hand.

The HTC One S has a true unibody design - besides the display glass on front, there are only two small panels, top and bottom at the back. They are necessary as antennas work much better behind a plastic panel than under metal - a lesson many companies learned the hard way.

The HTC One S felt nice to handle