Gallery for both offline and online images

The HTC gallery is a custom job, but stacks photos just like the vanilla Android gallery (it used to display a list of thumbnails). The app automatically locates images and videos, no matter where they are stored. You can choose to show/hide camera shots, All photos or All videos.

A tap on the Albums dropdown lets you view local albums, albums on a network (DLNA) device or online albums. On the cloud side, you get Facebook, Flickr, Dropbox, Picasa or SkyDrive.

Ones you pick one of the "stacks" (each standing for a folder), you're presented with a grid of the photos inside. Some photos have an icon indicating it's not a single photo but a burst shot instead. You can later go back and pick the keep or the one to be used as a thumbnail.

You can also mass delete images, but you can't copy/paste images across folders - you'd need a proper file manager for that. There are some basic editing tools - crop, rotate and effects (auto enhance, sepia, vintage, etc.).

The HTC One S supports multi-touch and you can take full advantage of it while browsing your images. You can zoom to 100% with a simple double tap on the screen. The implementation here is extra smooth too.

There's no dedicated video player onboard the HTC One S, video files can be accessed in the All videos subfolder in the Gallery.

The video playing interface on the HTC One S offers a view mode toggle (full screen or best fit) and you can scrub through videos. There's a shortcut that lets you adjust screen brightness and another one to take screenshots of videos.

The One S played a lot of the files we threw at it - AVI, MP4, MKV alike. It chocked on some files though - either playing with a choppy framerate or not at all. Still, unless there's a problem all popular video codecs run at up to 1080p resolution. Sound turned out problematic though, as AC3 or DTS wouldn't play (that's true for most other phones though).

Speaking of audio, you can choose between Beats Audio, HTC enhancer or No effects (as long as you are using a pair of headphones).

Subtitle support is available, though you can't manually pick a subtitle file, so you have to name it the same as the video file.

DLNA connectivity comes handy too - the One S can stream the videos wirelessly to your TV.

There's the MHL port too - if you have the proper adapter, you can hook up your HDTV using an HDMI cable..

Music player and Beats for all

The now playing interface is a Cover-Flow-like visualization of the current playlist - you can swipe sideways to skip songs back or forward. You can opt to view the full playlist if you need to skip more than a few tracks.

You can tap the ellipsis to automatically fetch album art for a track or look it up on Google or YouTube. From the Menu you get a Select player option, which is how you can play the song on a DLNA-enabled sound system or over Bluetooth.

The One S offers the Beats Audio sound enhancement to boost the sonic experience - you can use it with any headset you want. You can choose between multiple presets - Beats audio, classical, bass boost and so on or turn the effects completely off (finally that option is available).

Even though the phone doesn't come with a Beats headset it supports several of them - iBeats/urBeats, Beats Solo, Beats Pro or Beats Studio. You should pick the correct one as it adjusts the equalizer according to the characteristics of the headset. There's an "Other" option too, but if you're not using Beats you can just pick the one that sounds best to you.

The lockscreen has a card that shows the album art and name of the song and artist along with playback controls. You can drag this card into the ring to unlock the phone and launch the music player.

The card on the lockscreen that controls the music player

SoundHound is the track recognition of choice for HTC and they've even integrated it into the music player UI. It easily ID's a song from just a short sample. Or you can say the name of the artist and song and SoundHound will find it for you, including lyrics. The free app however only offers a limited number of uses (99).

The HTC One S is also equipped with an FM radio, which has a pretty simple interface. It automatically scans the area for the available stations and allows you to mark some of them as favorite. It also supports RDS and allows loudspeaker playback.

You can play the sound through the headphones or the loudspeaker. You can also choose Mono sound if the reception is poor. There's no Beats enhancement here though or a playback control card on the lockscreen.

If you have a data connection, you can use 7digital or TuneIn radio instead of relying on your local FM radio stations.

The cleanest audio output we have seen

The HTC One S performance in our audio quality test came as a really pleasant surprise to us. It appears that the Beats influence hasn't been limited to a single equalizer preset this time as the smartphone delivers the cleanest output we have seen from any device so far.

When connected to an active external amplifier, the HTC One S audio is simply flawless - volume levels are a little above average and it got excellent scores on every part of our test.

What's most impressive though is the One S retains virtually the same performance when you plug in a pair of headphones. The stereo crosstalk takes the tiniest dip of any smartphone we've seen so far, while the rest of the readings are either totally unaffected or worsen by an undetectable amount. Volume levels remain the same too, so it's arguably the most impressive overall performance to date.

Here go the results so you can see how the One S did for yourselves. 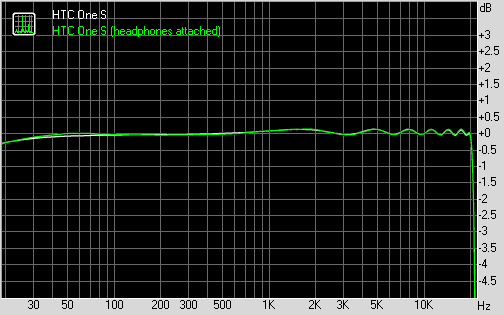