The HTC One X+ and the HTC 8X leak online

HTC is holding a press event on September 19, but it seems it couldn’t keep the curtain over the TBA phones.

The Twitter user Football4PDA (obviously a reputable XDA dev) spilled the beans on the HTC’s next flagships.

The first one is the Android 4.1 Jelly Bean-running One X+. The smartphone is based on the latest quad-core Tegra 3 AP37 chipset with a quad-core 1.6GHz processor, which is capable of running at 1.7GHz in single core mode.

The rest of the specs include 1GB of RAM, 32GB internal storage, 134.36 x 69.9 x 9.3 mm measurements and 129g of weight. Those measurements are pretty good indications for a 5-inch or so HD (or more) display. HTC Sense 4.5 UI is expected to run on top of Android Jelly Bean.

The next revealed device is the HTC 8X (C620a model name), based on Windows Phone 8. The phone packs a 4.3-inch HD display and runs on a 1.2GHz dual-core processor (Krait, perhaps). Other notable features are the 1 gig of RAM; the 16 gigs of internal storage; the 8MP camera with 28mm wide angle lens and bright, F2.0 aperture and 1080p video recording; and “ultra-wide angle” front camera; NFC and Beats Audio. 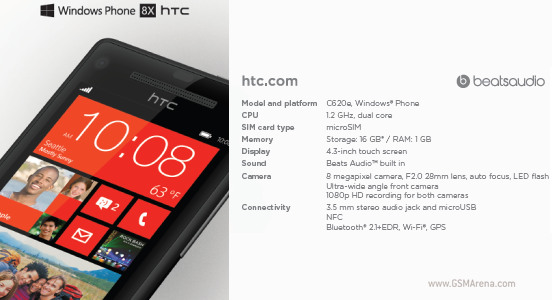 There is an asterisk next to the 16GB storage, which either indicates the presence of a microSD slot, or HTC will promote the 7GB SkyDrive cloud storage.

We guess the event on September 19 will be all about those two fellas.

How did you say that One X and One V were junked to China, its because you can't imitate the board and flat form of those two phones.....shame on you because you don't know how to use the said phones.......

How many pieces have you used ? I have tested more than 22,000 pieces of One X here that we imported.

You've got to be kidding. The One X is a beast and I dont understand how you are having issues with it!