HTC One X for AT&T gets benchmarked, looks impressive

When the AT&T flavored HTC One X flagship got announced during MWC, quite a few people were left wondering whether its Snapdragon S4 chipset with two CPU cores will match the performance of the quad-core Tegra 3 of the international version.

Well, it looks like there is no need to worry over the performance of the U.S. bound handset. A couple of leaked benchmarks from the device, leaked by an alleged AT&T device tester, point at a seriously capable piece of hardware coming our way. 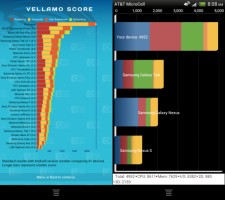 As you can see above, the two Krait cores, featured in the chipset have a serious knack for benchmarks. The tester has also mentioned that the battery life of the device is rather impressive as well.

The rumored time frame for the launch of the AT&T branded HTC One X is mid-May. Naturally, we will keep you posted as soon as we find out more. In the meantime, check out our hands-on of the LTE sporting HTC One X here.

I don't know how but I scored the same without overclocking! Got a lot of points in the I/O

As an employee of htc you seem to know nothing about processors. this is a 28nanometer SoC, using up about 1/3rd less power than the s3, and it is not an a15, qualcomm does not use cortex architecture, they use their own(scorpion, krait) and even tho...

So htc shoot her leg?