HTC One X for AT&T US review: Xtra flavor

A stripped down retail package, typical for the US

Inside the orange/white colored, AT&T branded box, you will find a charger, a microUSB cable, some booklets, and a tiny key to use when removing the microSIM card tray.

The retail package could have been much better

Headset would have certainly been appreciated in the retail package, given the One X's Beats Audio capabilities. You will however, have to take care of this on your own. AT&T stores will gladly help you out on this instance the moment you go to pick up a One X - the carrier does offer quite a few Beats Audio accessories.

The AT&T version of the HTC One X is an exact copy of its Tegra 3 sporting relative. This means that the device is just as gorgeous - it is simply better looking than any Android smartphone currently on the market. The handset's polycarbonate unibody is arguably HTC's best design accomplishment yet -the One X looks unmistakably like and HTC smartphone, yet completely new and like nothing else we've seen come from the Taiwanese manufacturer.

The build quality is also superb. The polycarbonate construction of the HTC One X is certain to endure use and abuse much better than any of its current alternatives.

The handset is available in two color schemes - matte black and white. You can't go wrong by picking either one.

For a smartphone with a massive 4.7" display on board, the HTC One X for AT&T offers some pretty acceptable measures. They are 134.8 x 69.9 x 8.9 mm, while the handset's weight is a relatively skinny 129 grams.

The One X display offers arguably the best image quality of any LCD on the market. Not only is it remarkably sharp (at about 312 ppi, it's virtually impossible to distinguish individual pixels), but also has great contrast and nicely saturated colors.

The screen is phenomenal

You can find out all about the display of the HTC One X for AT&T, and its performance over here.

Underneath the screen, we find the three controls typical of Android 4.0 ICS which, in the HTC tradition, come in capacitive flavor. The haptic enabled Back, Home and Task switcher keys are well spaced and very responsive. We've been over this already - while ICS dictates on-screen controls, the latest Sense UI requires actual Back and Home buttons.

The left side of the HTC One X features the microUSB port, which is used for data transfers, charging and, thanks to its MHL support, TV-out. With an MHL adapter you'll be able to output 1080p content to your HDTV directly from your phone, so purchasing one is probably worth it.

The microUSB port on the left

On the right side we find nothing but the super slim volume rocker. With all the fuss HTC made about the One X's camera, you would be forgiven for expecting to find a shutter key here, but there is no such thing.

The volume rocker is on the right

At the top we find the 3.5mm audio jack, a microphone pinhole (probably used for ambient noise cancellation in calls) and the Power/Lock key, which is easy enough to hit when needed but still reasonably secure against accidental presses. The microSIM slot is located nearby at the sloping part of the phone's rear body. You need to insert the SIM eject tool located in the retail box or a pin inside the hole next to the slot to access the microSIM tray.

The back of the HTC One X features the 8MP camera lens and the LED flash right next to it. The camera lens is placed on a bulge and the protective glass may get scratched by surfaces it comes in contact with.

The back is rather busy

The HTC One X for AT&T achieved the rather impressive endurance rating score of 42. This means that the smartphone will go on for 42 hours on a single charge, should you use it for an hour each of telephony, web browsing, and video playback every day. 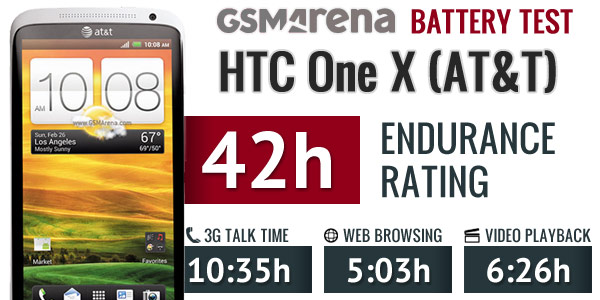 You can get the full scoop on the battery test of the One X for AT&T over here.

Handling the HTC One X for AT&T is, unsurprisingly, a great experience. Just like its global relative, the phone is a joy to behold. If looks and feel are what you are after, you will be hard pressed to find a better alternative in the land of Android.

Handling the One X is a joy

We have rarely encountered a phone, whose design and build quality are as flawless as in the case of the HTC One X for AT&T. The handset is a massive improvement over its predecessors - particularly in the looks department.

Following next is a look at the software of the Yankee One X and, very importantly, the performance of the dual-core CPU from Qualcomm.