Seems like HTC are releasing a special version of the Touch Diamond (P3700) stripped of all things-Diamond - at least as far as looks are concerned. The new device is called HTC P3702 and will be sold again as HTC Touch Diamond - for now it's available only in Taiwan.

If some of you find the original Touch Diamond looks a bit impractical (the wobbling back and all) here come some good news. HTC have released a new version of the handset with a nice rounded design - it still remains unknown whether it will be available only in Taiwan or it will hit other markets world wide.

Update: Since many of you are obviously commenting the 3.1 megapixel sign on the primary photo in this article, we decided to shed some light on the matter. The primary photo is an early rendered design published due to lack of any high-res official images of P3702. The final retail HTC P3702 Touch Diamond pictured further down in thumbnails bears the 3.2 megapixel sign which is shared by the original P3700 Touch Diamond. So it's nothing to worry about - both devices have one and the same camera. And if we are to elaborate further on the matter - both cameras are actually 3.15 megapixel units, but that obviously doesn't sound juicy enough to the HTC marketing department.

You are welcome to join us for a quick scan of the differences to the original Touch Diamond (P3702) and a few live pictures of the handset. 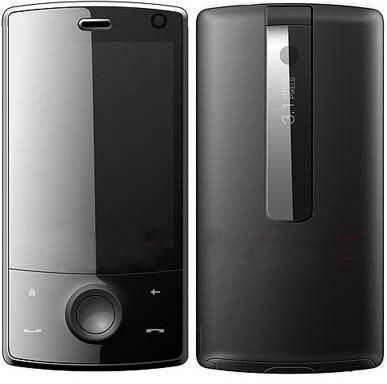 The HTC P3702 Touch Diamond runs on the same HTC platform as the T-mobile MDA Compact IV - Victor. The first obvious difference to the P3700 Touch Diamond is the only 128 MB of RAM (as compared to 192 MB).

Now you probably know that 64MB out of those 192MB are reserved for the dedicated video accelerator, which is present on the P3700 Touch Diamond. That gets us wondering whether the shortage of those 64 MB in the HTC P3702 Touch Diamond actually means it has no video acceleration. Of course it might still have an accelerator at the expense of the available user memory - we still don't know for sure.

In either case the P3702 Touch Diamond loses a point against the P3700 Touch Diamond. However the looks of the P3702 are more pleasing to the eye if you ask us and that should compensate a bit for the memory handicap. Fortunately, the two devices have no other so if you are into the Diamond but without it's Diamond back - you are free to opt for this one.

Here is a quick set of photos to give you the basic idea what the 3702 Diamond's rounded edges look like.

Meanwhile a CDMA version of the HTC Touch Diamond went successfully through the approval process at the North American FCC. It also sports the rounded edges of the P3702 Diamond rather than sticking to the original, so in essence it might be identical to the Victor-based device.

We also remind you that a no-3G version of the HTC Touch Diamond appeared earlier on the Indian market. Having a lower price tag than the original Diamond it is targeted at markets where 3G networks aren't available.

I think they created this phone to avoid fingerprint smudges

http://www.htc.com/tw/product.aspx?id=46930 found this link really interesting seems like the different case design of the victor has made it 1.5mm longer, lmm wider, 0.5mm thicker but 12g lighter.