Mango on the radar

The main view of the Pictures hub offers four options - camera roll, albums, date and people. A swipe to the left reveals what's new, which displays your Facebook friends and liked pages' new picture galleries. Another swipe shows your favorites section, where the photos you've faved are displayed and finally applications, where on the HTC Radar you'll find the Photo Enhancer app.

Albums features the camera roll, the preloaded system pictures and all of your Facebook albums. A flick to the left shows all your pictures sorted by date. You can't assign individual camera roll photos into albums, though.

The video player doesn’t recognize .AVI files – in other words, don’t expect DivX or XviD support. However, the Zune software on your computer will automatically convert such files to .MP4 – so, you can watch those formats on the HTC Radar, it’s just that the transfer to the device can take quite a while (depending on your computer's capabilities).

The HTC Radar did quite well in our audio output test. The smartphone was decent in both testing scenarios and showed some impressively high volume so the average user will have little to frown at.

With the headphones out of the equation, the Radar had good frequency response, great noise levels and dynamic range and little total harmonic distortion. The intermodulation distortion was higher than average though and so was the stereo crosstalk. Volume levels were among the highest we have seen.

The results with headphones in were about as good. Volume remained higher than average, while noise levels and dynamic range readings remained excellent. Intermodulation distortion and stereo crosstalk did spike, though, but only the first of those is potentially damaging to the sonic experience. 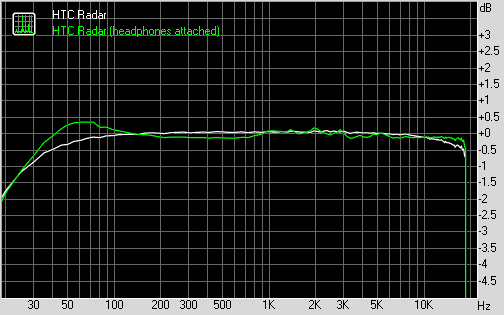