HTC Raider 4G (or HTC Holiday as it was known previously) has leaked numerous times before, but now we finally got official information about it. The Korean version of the LTE-packing smartphone was just unveiled.

HTC Raider 4G packs a 4.5-inch qHD IPS display and is based on the same platform as the recently announced Sensation XE - Qualcomm MSM8660 Snapdragon (but for the GSM radio, which has been replaced by CDMA). So there is a 1.5GHz dual-core Scorpion processor inside, Adreno 220 graphics and 1GB RAM. It also has 16GB internal storage expandable via a microSD card slot. 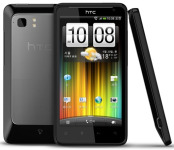 Just as expceted, the HTC Raider 4G runs on Android 2.3 Gingerbread and has the latest HTC Sense 3.5 UI on top of it.

There is no info on pricing or availability yet. There is also nothing on the expected GSM version which has previously been rumored to hit AT&T.

Can i use this mobile in India ?

can we expect this device in india????