Less than two weeks before its upcoming event, HTC released a rather strange teaser image, featuring a heart connected to a motherboard. Sporting the slogan "Alive Soon", the teaser is likely related to the soon to be revealed, HTC M7 Android flagship. 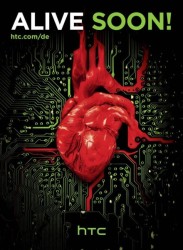 The HTC M7 is arguably one of the most important product launches for HTC for quite some time, considering the company's recent financial woes. The upcoming flagship has made a couple of unofficial appearances before, including a stint in the hands of HTC's overly excited chairman.

We are going to find out all about the new smartphone on February 19 in New York City. We will be live from the event, so be sure to check in for the full scoop on the HTC M7.

only a HD-3 can fight with galaxy s4 and sony zl, not M7 LOVE FROM ISRAEL

At a glance the picture looks like a blockbuster movie. Just saying.

The fight to be the king of All-Phone-Look-The-Same actually has only two players: Apple and Samsung. Just look at their line-ups this year. I hope you're not carrying one of them, or you'll be eating your words.