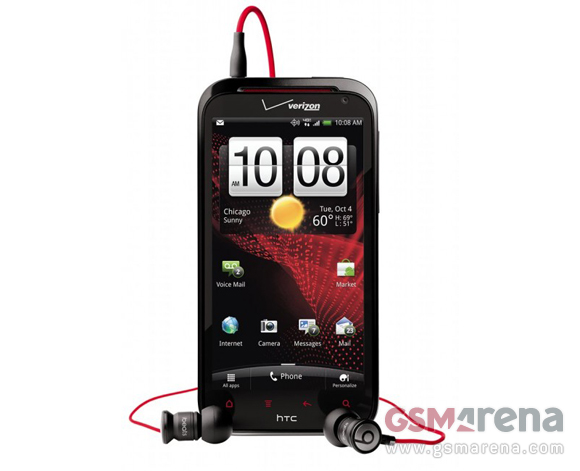 The Rezound will be the first smartphone with a 720p screen to hits the big Red (the Galaxy Nexus will actually become available a few days later), and is the only one on the market to boast a pixel density of 342 ppi.

Powered by a 1.5GHz dual-core Scorpion processor and sporting 1GB of RAM, the HTC Rezound shouldn't have any issues in the performance department. Storage is covered, too, with 16GB of on-board storage and a 16GB micro SD card included in the retail package.

At the back the HTC Rezound sports an 8MP f/2.2 camera capable of shooting 1080p video. To improve its low-light performance, HTC has blessed the Rezound with a dual LED flash. Naturally, there's Bluetooth, GPS and Wi-Fi radios on tap as well.

As we were at the HTC Rezound announcement event we are able to bring you a bunch of live photos of the device.

The HTC Rezound will be available in Verizon stores starting November 14 for $299 on a two-year contract.

and a forgot Razour has 342ppl

Its not true the HTC RAZOUR has 5 differences or more when you compare with HTc sensation xe the razour has a 3.5 sense,2mp front camera,HD display,16gb internal memory and it will upgrade on early 2012 on ice crem Sandwich 4.0

I think it will. And the Beats Audio just makes it better.