The video playing interface on the HTC Rhyme offers a full screen toggle (stretches the video to the screen's aspect) and you can scrub through videos. There's no subtitle support though.

The video player was hit or miss when it came to playing videos. Non-HD resolutions would play trouble-free for all formats supported but MKV. Even some HD videos managed to play but only just - we managed to get a 720p WMV and MP4 videos play smoothly, while the rest of the formats failed. Of course, the MP4 videos produced by the Rhyme’s own camera (H.264/AVC Baseline) played trouble-free.

DLNA connectivity comes handy too – the Rhyme can stream the videos wirelessly to your TV.

The music player is a looker

The music player has been updated a bit - the initial screen has two big buttons - a drop down for My Library/DLNA media servers switching and Categories.

The standard view for My Library is the Artists section, but you can easily switch to one of the other four categories (Albums, Songs, Playlists and Genres) through the Categories drop-down menu.

The Rhyme offers the SRS sound enhancement plus a standard set of equalizer presets when you connect a headset.

You can share a song or use DLNA to play the song through a DLNA-enabled audio system.

Sharing a song • Playing a song to another device without wires

The lockscreen has a neat feature - a 3D card stays on the lockscreen that lets you control the music player (previous, next and play/pause). The card also shows the album art and name of the song and artist. You can flip the card - it's backside shows album art and track info too, but lacks music controls (you can use that to prevent accidental taps that change the song).

The HTC Rhyme is also equipped with an FM radio, which has a pretty simple interface. It automatically scans the area for the available stations and allows you to mark some of them as favorite. It also supports RDS and allows loudspeaker playback.

Audio output is nothing to frown at

The HTC Rhyme did fairly well in our traditional audio output test.

When connected to an active external amplifier, the Rhyme produces really loud and nicely clear output. The scores it achieved are pretty great, save for the only average stereo crosstalk.

Sadly, volume drops to average levels when you plug in a pair of headphones and while the stereo crosstalk only suffers mildly, the intermodulation distortion rises quite a bit. Overall, the Rhyme isn't the audiophile's dream device, but it should easily do for the average user.

Here go the results so you can see how the Rhyme did for yourselves. 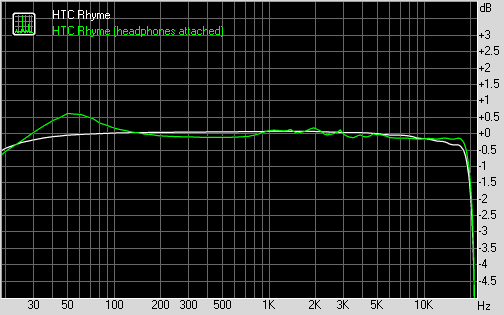