It seems that poor HTC just can't catch a break. The company released the first 1080p smartphone in the US with the DROID DNA, followed by the first global 1080p smartphone - the HTC Butterfly and yet its sales have failed to pick up.

Previously the company identified its poor marketing efforts as the cause for the unconvincing performance and promised to do something about it. The first attempt it made was to hold a dedicated event for its new One flagship, instead of introducing it at the MWC floor, so the smartphone has more time in the spotlight.

We'll see if this strategy works and exactly how much of an impact the One will make, but the fact is last March HTC stock was trading at over NT$600, and now it sits at just NT$255.50, a 57% decline.

The trend will probably continue now as HTC confirmed that its sales for February 2013 drop 44% compared to the same period of last year. In the past month HTC brought in NT$11 billion ($384 million), compared to over NT$20 billion ($685 million) for the February 2012. 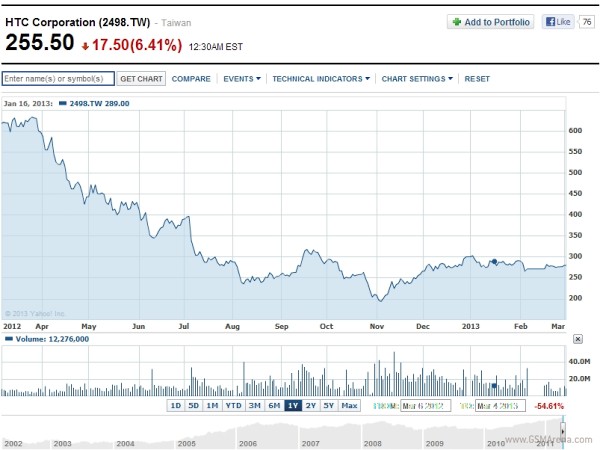 Here's hoping that HTC manages to right the ship, as it's a shame to see a company that otherwise makes such quality products suffer because of poor marketing decisions.

HTC's problem is that they make phones that appeal to a small minority. Specs don't sell phones and that's something HTC need to learn. They just put raw specs in their phones without anything added themselves. For example the HTC One comes with th...

Who,ll buy a htc. I dont now enyone who is satisfied with the product Timo

htc phones are a way too pricey compared to samsung. Htc can go for a price cut for its one x+ as samsung has done it for its s3