HTC sends out invites to a November 2 event, is it the U11 Plus?

HTC could announce its next flagship, the U11 Plus, at an event on November 2 in Taipei if a leaked press invite is to be believed.

The invite, pictured below, reports the date and time and is labeled with a self-explanatory U, signaling the announcement of a new U-series device. 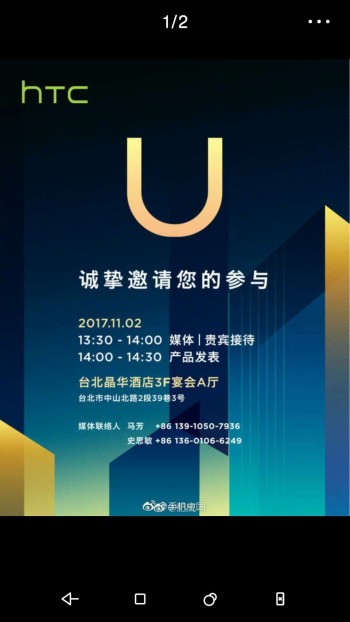 There will likely be a 12MP optically stabilized main camera with bright f/1.7 optics, UltraSpeed autofocus and an 8MP selfie snapper around the front. There's no word if HTC's BoomSound speakers will flank the 18:9 screen.

The HTC U11 Plus is rumored to sport two color options - Brilliant Black and Amazing Silver.

It seems that HTC is nowhere near giving up its smartphone business, despite selling its Pixel staff to Google.

When you watch YT, but when you watch for example a video which you have taken it will use the whole screen, so no pillarboxing.

They've been put 3.5mm jack for ages up till last year htc10 Did that make them fortune? NO Bring back 3.5mm will (NOT) change things either!

HTC, save yourself from the falling YoY sales and please include a 3.5 mm headphone jack.... From Quietly Brilliant, HTC has become Quietly Dying.......