HTC sends out MWC 2015 invites, is building a utopia

HTC sent out invites for its MWC 2015 event. The invite is pretty simple – a starry sky with the words "Utopia in progress" below the company's logo. Unfortunately that's all there is, no silhouettes of phones, no promises of ground-breaking flagships, nothing.

Last year at the MWC all HTC brought was the Desire 816, a mid-range phablet and all we got is a short hands on. This year, however, everyone is expecting the 2015 flagships to emerge at the MWC stage. 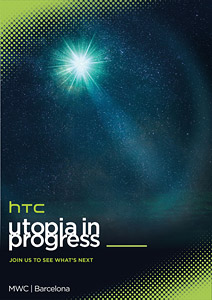 The HTC One (M9), if that's what they decide to call it, will reportedly make the jump to a 5" QHD screen, a Snapdragon 810 chipset, a 20.7MP camera on the front with maybe an UltraPixel selfie camera and a burly 3,500mAh battery to power it all.

Of course, HTC could release another mid-ranger and call it a day, the utopia message is as ambiguous as it gets. Still, the MWC is a couple of months away so there's plenty of time for teasers and leaks to stoke the fire.

It has to be named the one m9 cause that's the best name! Not another name, we already got that. Finally with one a f*cking good brand so it's easy to know what it is whit such a kind of name...

My current favorite brand! Own OneMax, waiting next flagship announcement and will buy if it worth! If not, then N4

Can't wait to see what's all about Utopia. Htc always into something new :D