HTC Sensation in Ice White, ICS for all Sensations [UPDATED]

A Dutch PR site broke the news that HTC will be releasing an Ice White color version of the HTC Sensation. To sweeten the deal, the phone will launch with Android 4.0 Ice Cream Sandwich out of the box. The whole Sensation line will be getting ICS too.

Update, March 3: It turns out that the Ice White Sensation won't be launching with Ice Cream Sandwich after all. It will launch with Android 2.3 Gingerbread and be updated with the rest of them. Also, some markets already have a white Sensation, so the big news is that the Sensation line is getting ICS.

The press release goes over the selling points of the HTC Sensation - 4.3" qHD screen, 8MP camera and so on. The Ice White version will have all those things too. 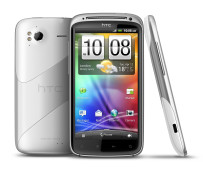 The Ice White HTC Sensation is supposed to launch on March 1.

The good news for owners of any Sensation (including the XE and XL) is that they'll be getting Ice Cream Sandwich as an Over-the-Air update soon. No separate date was given for the update, but those things are never simultaneous anyway.

The machine translation from Dutch is a little sketchy, but it seems that Sense UI will be updated too, with a shortcut dock at the bottom of the screen.

I have been using my Sensation cinse February. Everything works soomthly since then. I love it. And now, with ICS, omg, it's like a completely new phone. Thank you HTC!

Great! You work at HTC, so you must know when ICS FOTA update is to be released for Sensation!!

sensation is perhaps the worst high end phone from HTC. so the ICS wont be released before march? well cant complain since HTC promised to release the update in early 2012 which can be "ANY MONTH and DATE".