The three phones record FullHD video, though they all take slightly different approaches.

By those numbers, the Galaxy S II should have the best video quality and the Sensation should offer the best sound recording quality. And in real-life that’s exactly the result we’re getting.

After looking at the videos in detail, the Galaxy S II definitely has the lead in image quality. The higher bitrate allows it to resolve more fine detail than the other two. Surprisingly, the Sensation actually managed to beat the Optimus 2X in places, despite the lower bitrate (which is spread out thinner across more frames per second).

We've prepared some crops from video frames that should illustrate the differences. Have a look at areas where postprocessing and compression usually spoil the quality: foliage, text, thin lines and fine detail. 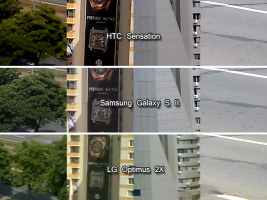 Crops from frames of 1080p videos

The Sensation's camcorder is consistent with the still camera's tendency to produce high-contrasty, oversharpened, warm images. You can check out the videos we recorded for our Video quality comparison (hit Play on the tool's page).

As we already pointed out, you can hear how much cleaner the sound is on the Sensation compared to the Galaxy S II due to the higher sampling rate.

The Galaxy S II always focuses only after the video has started recording, making the first second or two of captured video blurry. The Optimus 2X, on the other hand, adjusts the exposition in the first second of each clip. The Sensation does something similar - watch how exposition "pulses" as cars pass by.

Check out these samples we've uploaded to YouTube - don't forget to click 1080p and watch them in fullscreen for best viewing.

It's also interesting to see the different Field of View (FoV) of each camera. We've prepared a collage of still frames from the three cameras. The Optimus 2X has the widest FoV, while the Galaxy S II is the narrowest (in 1080p mode, at least). 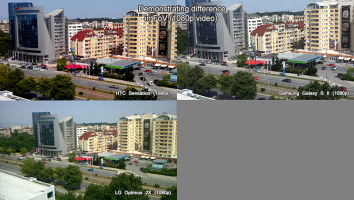 A collage that shows the FoV in 1080p mode

The three phones also offer 720p mode. All three record 720p@30fps and the results are much more consistent across the sample. We have YouTube videos for you to check out as well.

We have some crops from 720p video frames as well, which will highlight the differences in how each phone performs in this mode. 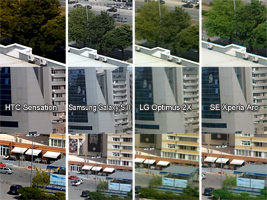 Crops from frames of 720p videos

Curiously, the FoV changes once you switch to 720p mode. The Galaxy S II becomes the widest, while the Sensation is the narrowest. We've included the Sony Ericsson Xperia Arc here, which is about halfway between the Sensation and the Optimus 2X in terms of FoV. 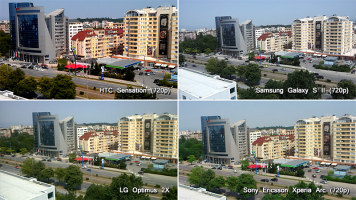 A collage that shows the FoV in 720p mode

Much like the synthetic benchmarks for still shots, the HTC Sensation appears to do very well in the Video quality comparison. Still, if you look at the top left and right corners of the Good light images, you'll see the main source of its problems - noise and compression.

If you watch that test video, you'll see how quickly the Sensation adjusts its exposure after we switch the lights off. The resolution chart video is also very good, though that's entirely static and the video seems to fit the allotted 10Mbps very well - suffering no extra compression as opposed to the real-life action-filled clips.

This suggests that if HTC were to bump up the video bitrate, the results from the video camera on the Sensation will improve quite a bit.

As one of the first FullHD-capable phones from HTC, the Sensation was quite interesting to test. There are some issues that could possibly be fixed with a software update, but even without one you can shoot 1080p home videos with excellent audio in stereo and not regret going for the Sensation.