The HTC gallery has changed - it now stacks photos like the vanilla Android gallery does (it used to display a list of thumbnails). The Albums app automatically locates images and videos, no matter where they are stored.

Ones you pick one of the "stacks" (each representing a folder), you're presented with a grid of the photos inside. There is also a camera shortcut, but it’s only available once you start browsing any of the sub-folders.

Sharing a photo on the HTC Sensation XE is very straightforward – tap the share button and pick your preferred sharing method. There’s everything from sharing via Bluetooth or email, to posting on Facebook, Twitter or photo sharing sites like Picasa and Flickr. You can also upload videos straight to YouTube. You could use DLNA to push photos to your compatible TV too.

You can also mass delete images, but still no mass copy-and-paste options.

You can’t copy/paste images from folder to folder either – you’d need a proper file manager for that.

HTC Sensation XE supports multi-touch and you can take full advantage of it while browsing your images. You can zoom to 100% with a simple double tap on the screen. The implementation here is extra smooth too.

The video playing interface on the HTC Sensation XE offers a full screen toggle (stretch / crop video to fit the screen) and you can scrub through videos. SRS sound enhancement is also available but there’s no subtitle support.

The video player does OK in general - 1080p MP4 videos were no problem. The player handled some 720p DivX or XviD videos. However, it was picky about which videos it would play and which it wouldn’t - especially when dealing with HD clips or large files. Most of the 360p XviD videos that played were choppy though. There's no MKV or subtitle support either, which was disappointing.

DLNA connectivity comes handy too – the Sensation XE can stream the videos wirelessly to your TV.

There's the MHL port too - if you have the proper adapter, you can hook up your HDTV using an HDMI cable. The Sensation XE needs some work in this department though, if we're to accept it as a proper portable HD video player.

Beats Audio and HTC Enhancer presets are available in the video player too.

The standard music library view is the Artists section, but you can easily switch to one of the other six tabs beneath, which are for Albums, All Songs, Playlists, Genres, Composers and Purchased (at least our unit had, which featured a Vodafone music shop).

A dropdown at the top of the screen lets you switch between your library on the phone and DLNA media servers.

The now playing interface is a Cover-Flow-like visualization of the current playlist – you can swipe sideways to skip songs back or forward. You can opt to view the full playlist if you need to skip more than a few tracks.

The Sensation XE offers Beats Audio sound enhancement to boost the listening experience. It is available only when you plug in your Monster headphones. There are no other equalizer presets, just Beats Audio or HTC Enhancer.

Unfortunately you can't listen music without something "enhancing" your songs. If you don't use the Beats Audio, you'll find the HTC preset really awful. So, you either listen music with Beats Audio and headset combo, or you don’t. You can use whatever headset you like, but it just won't be the same.

Player controls in the notification area

Two shortcuts in the top corners act as toggles for shuffle and repeat. Other goodies include looking up a song on YouTube or updating the album art for the current or all songs. You can enable auto update too.

Tapping the bar at the top of the screen that says "HTC Sensation XE" lets you play the song on another device wirelessly - either over DLNA or Bluetooth.

Playing a song to another device without wires

The lockscreen has a neat feature - a 3D card stays on the lockscreen that lets you control the music player (previous, next and play/pause). The card also shows the album art and name of the song and artist. You can flip the card - it's backside shows album art and track info too, but lacks music controls. That's not particularly useful but is good eye candy.

There’s a music recognition app – SoundHound. It easily ID's a song from just a short sample. Or you can say the name of the artist and song and SoundHound will find it for you, including lyrics. The free app however only offers a limited number of uses (99).

We are not quite sure where to start with the HTC Sensation XE audio output. During our test we were surprised to find out that there was no way to turn off the audio enhancements on the phone. Even if you disable the Beats audio option, the HTC enhancements are automatically activated, so there's no way to get what's regarded as a "clean" audio output from this one.

And while turning on certain equalizer presets are what most people prefer anyway, real audiophiles know that it's the perfectly clean, untouched audio output that makes a great music player.

Now the good news is that the rest of the readings in our test were pretty good. The HTC Sensation XE did spectacularly in the active external amplifier part of the test. It was one of the loudest smartphones we have seen (it even outdid the iPhone 4S) and achieved some excellent scores.

Unfortunately, that frequency response can in no way be interpreted as a good result. We get it that people like deep bass and everything, but why not give them the option to also turn it off?

As for the HTC Sensation XE performance with headphones plugged in, it's pretty good, but not quite as impressive. The volume levels drop from class-leading to above average and intermodulation distortion creeps in. Stereo crosstalk rises a bit too, but it's nothing to worry about.

Overall we'd give excellent mark to the Sensation XE if it wasn't for the always-on equalizer. It's up to you to judge whether that concerns you or not. 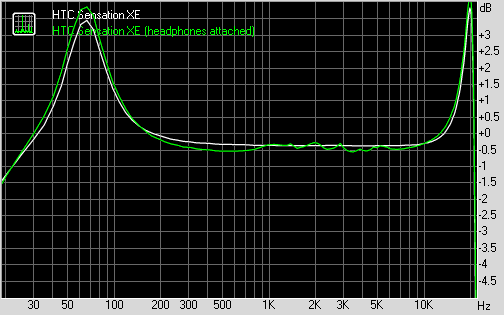 The HTC Sensation XE is also equipped with an FM radio, which has a pretty simple interface. It automatically scans the area for the available stations and allows you to mark some of them as favorite. It also supports RDS and allows loudspeaker playback.

Unlike the first Sensation, the FM radio app on the Sensation XE starts and turns off a lot faster (about a second or two).