The HTC Touch Diamond2 offers a small amount of storage - about 300MB. This is barely sufficient and you'll definitely find yourself needing a higher-capacity microSD card.

The WinMo file manager on the Diamond2

The file manager is the standard Windows Mobile one and won't surprise anyone.

The image is opened automatically in landscape mode and there is no option to rotate it to portrait view. Still that's not a bad thing because it means the photos you take with the camera are always properly displayed. Once the image is opened, you can zoom in or out using the new touch-zoom bar or continue to the previous/next by sweeping a finger on the current one.

The old circular gesture is also available, but in most cases doesn't work properly or completely and we think it found its place in the final software by accident. Anyway, if you try hard enough you might manage to make it zoom that way, but we think it's a feature that should be removed in any future firmware updates.

Scrolling to the next image is smooth and instantaneous with a single sweep of the finger.

It's got to be said that the Touch Diamond2 has a certain advantage over competing devices when it comes to image browsing since this is one of the applications where WVGA really makes a difference - the images look stunning on the high resolution screen.

And also zooming in and out is extra fast.

iPod-style music player is also onboard

Just like the previous Diamond, the Touch Diamond2 has a good music player that makes excellent use of Album art. The music player is accessible straight from the TouchFLO home screen with a cool Apple-like Cover Flow animation for you to pick an album from.

Unfortunately, there is no 3.5mm audio jack on the Diamond2 or on the headset, so unless you get hold of a third-party adapter, you're stuck with the supplied headphones which - simply put - suck. The headset looks decent enough, but listening to music is not among its strengths and is best left for making phone calls.

The audio quality of the HTC Touch Diamond2 has improved greatly over its predecessor. It now sports a much better frequency response, which keeps within the +-1db level throughout the audible range.

The noise level, dynamic range and stereo crosstalk readings haven't changed too much but this is only because they were pretty good on the original Diamond already.

The total harmonic and intermodulation distortion readings are also improved although we have to admit that they have still remained only average.

With the introduction of the Diamond2 HTC are making a huge step forward in matching the music phones' audio quality. Not so long ago the WinMo devices were known for their mediocre audio but luckily we got a "myth busted" on this one too. 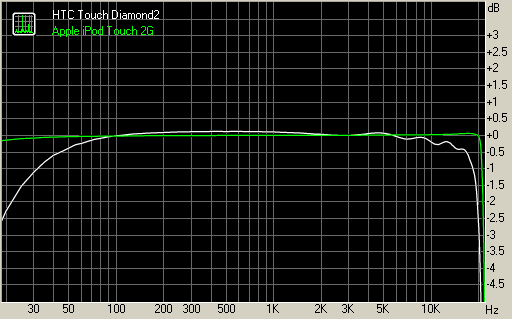 The FM radio does the job perfectly

The Diamond2 built-in FM radio naturally requires the headset to be plugged-in. As we already told you however, you would be better off using a third-party headset with some sort of 3.5mm audio adapter as the bundled ones are not well suited for listening to music.

Nevertheless, the Touch Diamond2 FM radio has an excellent interface much like the rest of the multimedia players on board and offers memory for some 20 radio stations.

The FM Radio on the Touch Diamond

RDS is available too - so overall, radio is handled pretty well on the Touch Diamond2.

The Diamond2 comes with the standard - and sadly underperforming - Windows Media Player. It only manages mp4 and 3gp and for DivX/XviD support you will need a third party application.

The Windows Media player doesn't do too well in the music playing department either since the interface is still stylus-oriented. Tracks and videos are handled much like in the desktop version.

The HTC Touch Diamond2 has a nice independent video player but it only supports the video/audio codecs available to Windows Mobile in the first place. To enjoy a wider range of video options on the Diamond (DiVX or XViD for example), you will probably need to purchase a dedicated video player with additional codec support.

Playing video on the Diamond

We resorted to the well-known Core player and as usual it did a great job.

The HTC Diamond2 is pretty good at full-screen video playback - we played an XviD-encoded DVD rip for PC playback and, luckily, there were no skipped frames. But we can't say the same thing for the DivX ones. Those clips at VGA resolution and 30 fps dropped nearly half the frames, while those at 24fps played just fine. It seems that the Diamond2 can't handle DivX correctly, but as XviD encoding is more popular anyway, it's not a big deal.

We tried exactly the same video samples on the previous Diamond, where the screen resolution is 30% smaller. The results were a mixed-bag - the Touch Diamond2 did 10% better at the the XviD benchmark, but another 10% worse on the DivX. As we said, DivX doesn't seem to be its favorite type of encoding.

As you might have guessed, videos looked excellent on the Diamond2 WVGA display.