Yesterday we told you about the HTC Touch.B handset but it appears that some of the initial info we've got has been misleading. Apparently the HTC Touch2 twin won't be running the Android OS, but Qualcomm's Brew platform instead. And we've also got some new photos and a couple of screenshots of the Touch.B to show you. 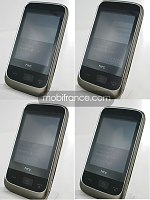 The Qualcomm Brew platform has been around for quite a while now, but it never managed to achieve major success. One of the reasons for this is that it lacked GSM support for the largest part of its existence. Now that they have fixed that, Qualcomm are obviously trying to push it to a much wider audience and HTC seems quite the right partner.

According to the source, the Brew version that goes with the HTC Touch.B resembles a trimmed-down HTC TouchFLO UI, but being in Alpha stages of its development it is probably too early to pass judgments.

The new specs that we know about the HTC Touch.B are somewhat discouraging though. The handset is said to sport a 2 mega pixel camera with no video recording and no Wi-Fi. At least 3G and Bluetooth are supported so we guess it isn't a completely downer.

i was hoping a better design for an android phone...its about time to create an android phone with less phisical buttons and NO CHIN. This one seems ugly and the OS not appealing. too simple.

hehehe. nice interpretation :p that way ... it's really battle between OS since the hardware are all the same XD~