The HTC U11+ runs on Android Oreo with Sense UI on top of it. Sense has gotten leaner over the years with the most drastic reduction happening last year when HTC decided that it would let Google take care of the core apps by shutting down HTC's in-house apps like: browser, calendar, and gallery among others. 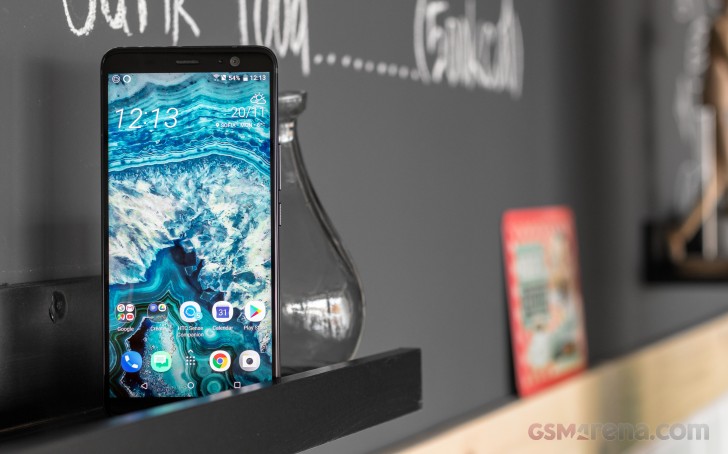 Let's get right into it. Starting off ways to wake the device: there are several enabled by default. You can press the power key, double tap the screen, tap the fingerprint sensor, or slide up on the screen to unlock from sleep. The lock screen offers you four app shortcuts, which are identical to the ones you have on your homescreen.

The U11+ also supports Smart Display - an always-on screen with relevant information. You can also set it up to work only upon motion detection to save some battery. Or turn it off altogether.

The fingerprint scanner is lighting fast and very accurate. You save up to five fingerprints.

There are a couple of default home pages, though you may add as many as you'd like. The main app drawer is organized to fit all pre-installed apps into a single page. Apps in the drawer can be manually arranged or sorted by install date or alphabetically.

A swipe to the left brings you to BlinkFeed, which you can disable, or make it yours by adding feeds, or even set it as your default home screen. Your docked apps are even laid over BlinkFeed. HTC has been expanding BlinkFeed's functionality for years now, so you can add a wide variety of feeds and social networks to it.

HTC has a powerful theming engine on the U11+ for those who love to customize every aspect of the phone's appearance. You can change many aspects of the theme down to the notification sounds, dialer color scheme, and wallpapers in various locations.

HTC offers two kinds of themes: classic themes and freestyle themes. The first one is self-explanatory, but the freestyle option is intended for folks to add apps or widgets however they'd like. Combine it with your favorite custom widget maker to create your unique setup.

A neat feature Sense UI offers is customization of the navigation bar. In addition to reposition the keys, you can opt for a second panel available with a swipe sideways. There you can get shortcuts for the notification page, take a screenshot, lock/power, among others.

The looks of the notification shade and the quick settings are mostly stock. HTC Sense supports Android's native multi-window. To use it, open any app, then press-holding the Recents key will let you choose another app that's already been opened. The UI will tell you if an app doesn't support multi-window.

Finally, HTC's Boost+ app offers some power-user options. There are automatic optimizations like Boost and Clear junk which clear RAM and cached files, respectively. 'Optimize background apps' disables apps you haven't used in 3 days or more. You can disable this per app.

Finally, the Sense Companion isn't meant to be "just some other assistant". It was created and first debuted on the HTC U Ultra and is meant to compliment your assistant's (Google or Alexa) existing features and functions; this follows the theme of getting rid of redundant apps.

What the Companion app does is takes various behavioral data points like location, time, and fitness activity, and develops recommendations to make that can benefit you. For example: If you normally leave work at 4PM every day and your calendar lists dinner reservations in the city, your Companion App would recommend that you top up your battery, hours before you leave work.

For Companion App to work best, it's recommended you allow a bunch of permissions to the app so that the app's AI engine can make the best recommendations based on your location, time between calendar events, active phone usage, and fitness/activity data.

Recommendations are given via a non-obtrusive bubble that you can move and replace until you can get to it later. The more you take action on these recommendations, the smarter the Companion app gets by learning which recommendations you care or don't care about.

HTC calls its new squeeze feature Edge Sense. The sides of the phone are embedded with pressure sensors. This allows you to have two gestures to program to whatever app you'd like. One that may be particularly useful is the Camera app, though, you can achieve the same result by double-pressing the power key and using the volume rocker to take the picture. 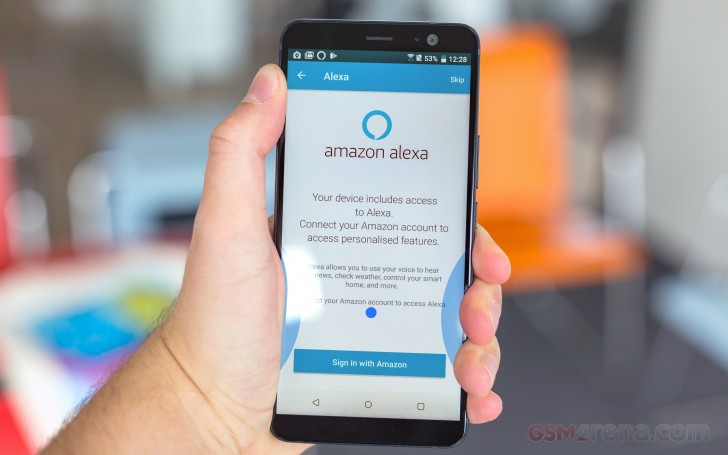 The first time you squeeze the phone, you'll be prompted to set up the Edge Sense feature. You'll follow a tutorial that shows you how long and how hard you're squeezing with the help of on-screen visuals to guide you. Note that your ability to squeeze may be affected by the kind of case you use, so keep that in mind if shopping for one.

Advanced mode is what lets you program two gestures. The default gestures are: short squeeze opens camera, a second squeeze takes the photo. It's worth noting the UI purposely has a delay built into it as to wait for you to stabilize the camera before taking a shot. That way, the phone isn't trembling mid-shot.

The other default action is a squeeze and hold will activate the phone's default assistant - Google's or Amazon Alexa. Doing the same thing while the keyboard is open will activate voice-to-text typing.

And here comes the best part - you can configure the gestures' behavior for the UI, and in-app for each installed app. Globally, you can set a long or short squeeze to launch the Edge Launcher, which is a two-step dialer popping on the screen, which can replace your whole app drawer. There is also a calendar around, which is nice.

You can set the gestures to work differently for each of your apps. For example, you can set a short squeeze to take a screenshot in your favorite game.

There are so many different configurations you can do with the squeeze detection unlike the Pixel 2 XL. HTC gave you the freedom to make the U11+ yours and the tools to do it.