HTC U12+ is now receiving Android 9 Pie in the US 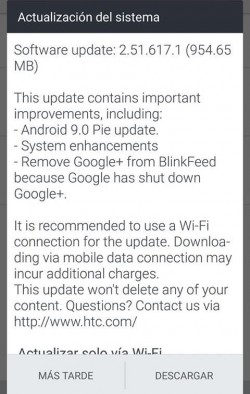 If you own an HTC U12+ bought from the US, rejoice! The update to Android 9 Pie is finally headed your way - that is, if you haven't received the coveted notification already.

HTC started the rollout of the update in its home market of Taiwan first, back in early July. Then, about a month later, it spread to Europe, and now it's finally jumping across the pond to reach the US.

The update arrives over-the-air as a 954MB download, and after you install it you'll be on software version 2.51.617.1, running Android 9 Pie of course. The changelog is pretty bare as you can see. Aside from the OS upgrade, you also get some unnamed "system enhancements" as well as the removal of Google+ from BlinkFeed because Google+ has ceased to exist.

As usual, the update may be rolling out in stages, which means that you might have to wait a few days for it to hit your device. Using a Wi-Fi connection to grab it is recommended.

The 9.0 update for me unfortunately as welcome as it was, is a huge disappointment. Nothing but bugs im finding, one of the big ones is that when using a play & charge audio dongle it locks the device into thinking that it is on quick charge with...

Very happy after 2 weeks after tge update. Totally stable and better battery life. HTC U12+ is an excellent phone. Unfortunately, most of the reviewers seem to bag it due to the screen to body ratio. Personally, I hate the screen going right to the ...