HTC U12+ leaked specs sheet leaves nothing to the imagination

HTC U12+ recently appeared in case renders with no notch and four cameras - two on the front, two more on the back. Latest juicy info is coming from China, revealing all the phones specifications thanks to a leaked sheet. 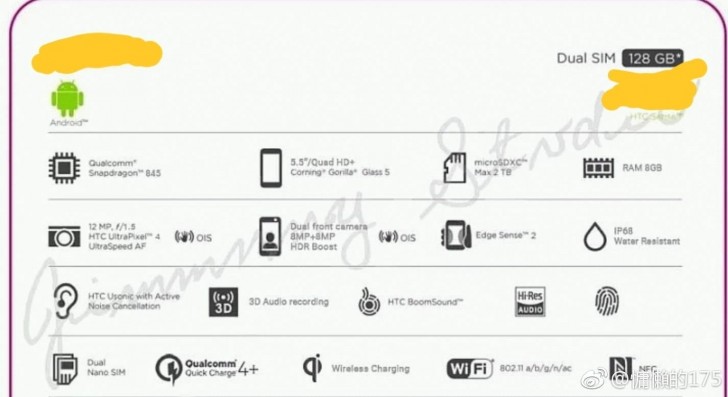 Selfies can be snapped with two 8 MP sensors, and the setup will also support OIS and HDR Boost. The primary camera is listed as 12 MP with f/1.5 lens with the UltraPixel 4 technology and UltraSpeed AF. OIS is also available on the back snappers. The second sensor is rumored to have 16 MP resolution.

The phone will bring Edge Sense 2 - the new version of the squeeze UI. There is also HTC Usonic tech that adapts the sound your liking. The IP68 compatibility means the phone will be water- and dustproof. Lets hope this time youll be able to take pictures while jumping from a pool tower, unlike the U11.

The phone will have Qualcomms Quick Charge 4+ technology that promises up to 15% faster and up to 30% more efficient charging. Right now no major players support it so HTC is taking a step ahead of competitors. There is also Qi wireless charging, NFC and Wi-Fi 802.11 a/b/g/n/ac.

The HTC U12+ is expected to debut in April, although HTC is yet to set a date.

Says it has HTC Sense. Speaking of sense, definitely glad that HTC had the sense not to add a notch like Apple or say, any number of copy cat oem's. Cheers all. ^_^ .

give an amoled panel and i am sold, could be ground breaking for htc, i am a htc 10 user, the outdoor viewing in lcd is just plain bad, no headphone jack is a trend and htc compemsates for it by the noise cancellation tech which is great and unique, ...